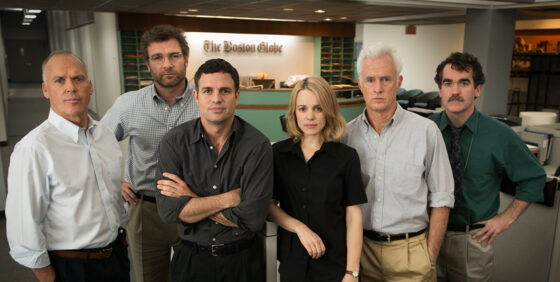 Cinema has a thing for journalism, but any reciprocal adulation must certainly be attenuated by the swift, sensational work that movies make of the press’ labours. No small irony then that Spotlight’s story—about a crack but underperforming team of Boston Globe investigative reporters trying to expose the Massachusetts Catholic Church sex abuse scandal—renders toil as triumph, and wrings efficacy out of the ineffectual.

The Spotlight team, a stable of actor’s actors headed up by “player-coach” Walter “Robby” Robinson (Michael Keaton, in an introspective turn), is served warning that readership is plummeting, and new editor Marty Baron (Liev Schreiber, unflappable as the unwelcomed, “unmarried Florida Jew who hates baseball”) bears down in an effort to “take a hard look at things” while weaning the staff of complacency and a golf habit.

Baron’s provocation of nailing the Boston Archdiocese for covering up a priest’s misconduct becomes, reluctantly but determinedly, a moral undertaking for the Spotlight crew, an amicable quartet of lapsed Catholics who typify Boston’s working-class, down-to-earth demographic. Shambolic sidekick to Keaton’s Robinson is Mark Ruffalo’s naively endearing Rezendes (whose outdated Toyota Camry rhymes with his mentor’s blandly current version), who dives headlong into legal annals and confronts close-mouthed attorneys of varying moral disposition. Rachel McAdams’ Sacha Pfeiffer is on the victims’ beat, alternately greeted with slammed doors or candid confessionals (for which she’s not averse to manipulative tactics disguised as emotional sincerity). For a film tasked with extracting feel-good sentiment from a feel-bad reality, the depiction of sexuality remains necessarily cloaked: the depiction of abuse is relegated to priests demanding blow jobs, while the more damningly psychological dynamic of how pray and prey conspire to deprave escapes the investigation’s (and by extension the film’s) scope of ethical concern.

Less compelling in its moralizing, Spotlight is propelled by the dictates of the procedural genre, which director Tom McCarthy nails with reportorial efficiency. Corruption abounds in Boston’s entrenched culture of catechesis, trailed by a power of attorney intent on protecting dubious clients and keeping things hush (Stanley Tucci and Billy Crudup offer variations on the theme, while bolstering the film’s ensemble Oscar-thesp quotient). In the end, the Spotlight crew is obliged to illuminate its own historical negligence, which accounts for Keaton’s unmasked man, all furrowed brow and paucity of words to Ruffalo’s good conscience wrapped in a leather jacket. Curiously, McCarthy’s own investigative report takes the kinds of liberties that the Spotlight crew would deem pleasing to the readership, but ultimately unworthy of Pulitzer prowess.