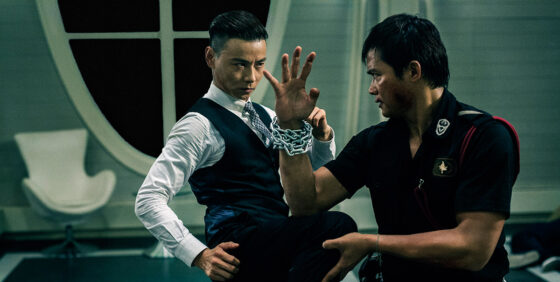 It’s been ten years since Wilson Yip’s SPL (unceremoniously retitled Kill Zone for its North American home video release), and apart from the reappearance of Simon Yam in a completely different role, there’s not much connection between the first film and this supposed sequel. Helmed by Milky Way protégé Soi Cheang (Accident, Motorway), this entry is not exactly lacking for action or fight sequences, but there’s a completely different sensibility at work here. For one thing, ostensible leading man Tony Jaa is actually subsumed into an ensemble, which is anchored just as firmly by Yam, Wu Jing, and Louis Koo in a really creepy wig.

For the first hour, Jaa doesn’t even perform any stunts, indicating that maybe he’s easing into his Jackie Chan phase. He’s playing more of a sensitive family man here, his daughter’s rare blood illness serving as the prime mover in an unapologetically byzantine plot. The girl’s only matching bone-marrow donor is an undercover cop (Wu) who’s been double-crossed and sent to the hellhole Thai prison where Jaa works as a guard. Yam is the HK cop trying to retrieve him, Koo is the drug lord who needs a heart transplant, and none of this makes any sense until at least 30 minutes in. In fact, only at the halfway mark do we get an honest-to-goodness set piece. The prison riot is top-notch, and I hope David Bordwell will use it as an opportunity for some high-formalist kung fu.

Coming up through the Johnnie To/Wai Ka Fai Academy, there’s an equal amount of gun and knife ballet as there is martial-arts choreography; this is perhaps why Jaa slips so comfortably into the overall texture rather than forcing an ill-fitting star turn. What’s really impressive about SPL 2 is its genuine interest in tracing and retracing the convoluted battles that are happening inside its characters’ bodies. Hereditary illness, organ harvesting, drug addiction, even the complications of whether or not you can speak the language of your potential blood donor, all result in a decidedly inward terrain, where people can pummel the hell out of one another but the real consequences are deep and untouchable.