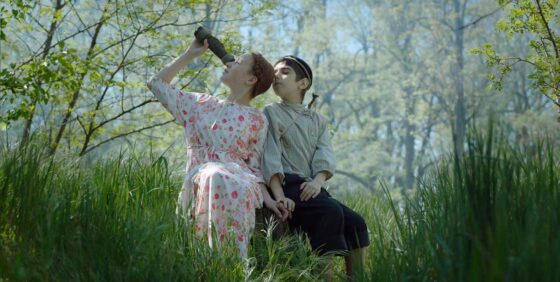 This is an unusual case, an exceedingly brief (only 76-minute) film that still manages to feel overstuffed and meandering. This could be the result of director Eva Neymann’s decision to freely adapt Sholem Aleichem’s short fiction, yoking together characters and scenarios from no less than ten stories from the eponymous collection. As a result, Song of Songs feels like several films at once, and not all of them are equally compelling. Neymann constructs a primary thread by tracing the life of Shimek (Yevheniy Kogan), a young boy coming of age in a shtetl at the start of the 20th century. He pines for neighbour girl Buzya (Milena Tsibulskaya), but also struggles with his family and tradition by wanting to study medicine instead of the Talmud. Once Neymann makes it past Shimek’s awkward childhood and the rather rote depiction of staid family life and Jewish elders, Song of Songs comes to life, but even then she seems mired in the filmic models she clearly cut her teeth on, like the fog-shrouded mysticism of Tarkovsky and especially the static tableaux of Parajanov. This turns Aleichem’s Jewish community into mere figures of devotion. Only when the adult Shimek and Buzya (Arseniy Semenov, Arina Postolova-Tihipko) are individuated is Neymann able to sing her own song.