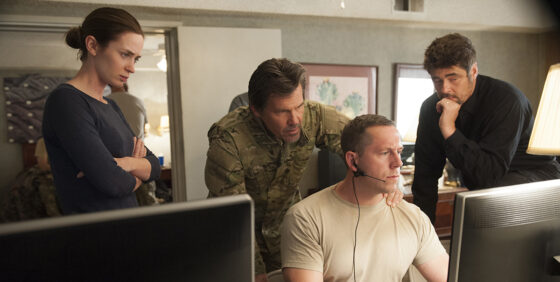 For those who heaped praise on Sicario after its Cannes premiere, all that mattered—in no particular order—were the virtues of Roger Deakins’ cinematography, Emily Blunt’s kick-ass performance as a FBI agent, and Denis Villeneuve’s assured command of the material. What became lost as critics endorsed the most vapid sort of formalism was the shallow and exploitative nature of the material itself. While the film’s defenders extolled the film’s narrative “ambiguities,” it soon becomes clear that certain strategically placed red herrings only temporarily divert us from this drug-cartel melodrama’s essentially conventional and reactionary tenor.

The convoluted narrative propels Blunt’s Kate Macer into a murky scheme in which she partners with the suavely stoic Matt Graver (Josh Brolin), supposedly a defense contractor but a man whose motivations remain as opaque as are necessary to suit the purposes of this implausible thriller. Entering a Mexico that seems to exemplify nothing but barbarism, these representatives of The War on Drugs are revealed as cynical but courageous, self-deluding but thoroughly intransigent in their efforts to ensnare a notorious kingpin. Far from being the cunningly ambiguous moral parable its champions claim it to be, Sicario actually hedges its bets in order to remain shamelessly crowd-pleasing. The shadowy character of Alejandro (Benicio del Toro) sums up the forces of evil that Kate and Matt are opposing: he’s an operator who is introduced as a former Mexican prosecutor, but whose ties to the drug world (and vengeful propensities) make him straightforwardly ghoulish. In other words, Mexico is a heart of darkness that devours well-intentioned, clean-cut Americans. Pristine cinematography and capable performances notwithstanding, Sicario is nothing more than pseudo-sophisticated hokum.