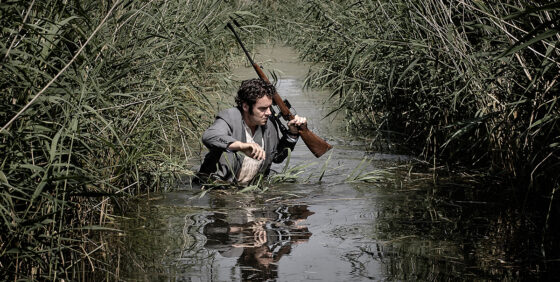 Double Dutch hitmen, separated by a swamp and gunning for each other at the behest of a mutual colleague with his own agenda and no scruples: the set-up for Alex van Warmerdam’s comic thriller is lean and mean. The follow-through, though, is cramped, convoluted, and downright cruel, at times in ways that exceed the boundaries of what seems intended simply as a genre exercise. For instance, it’s not clear why drug-addled novelist cum contract killer Ramon Bax (van Warmerdam) has to be such a mean bastard to his much younger girlfriend (introduced screeching nude in the shower), or why, in general, the female characters get knocked about and drugged to keep them out of the way of the action—although this strand of the film at least pays off at the climax, which offers up a striking frieze of vulnerability to be contemplated by both pitiless family-man marksman Schneider (Tom Dewispelaere) and the audience, who, throughout, has hypothetically been cheering his every well-placed headshot. Schneider vs. Bax is superbly made, with a visual design tied to the long, sometimes cluttered sightlines of its co-antagonists, and the choreography of bodies and bullets is adroitly managed, and yet it doesn’t have any real excitement; it’s the work of a talented pro who knows how to shoot but, like his characters, maybe isn’t quite sure why he’s doing it in the first place.