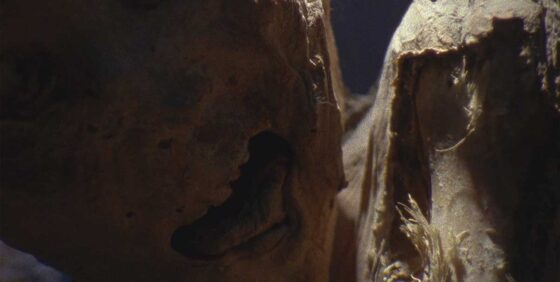 Nelson De Los Santos Arias’ Santa Teresa and Other Stories is a (very) loose adaptation of parts of Roberto Bolaño’s epic novel 2666 which the filmmaker interweaves with the stories of friends and collaborators. The title is a hint: Santa Teresa and Other Stories is something of a grab-bag, shot on a variety of film and video formats, and—with its cacophony of narrative voices and types and textures of images—a bit overloaded. But with this ambition comes an unmistakable talent, even grace, as De Los Santos Arias amasses a rich audiovisual portrait of Mexico through fragments of stories, patches of sound and music, and still and moving images.

Following in the footsteps of Bolaño’s detective protagonist Juan de Dios Martínez, the film functions as a compendium of dreams and visions of the fictional locale of Santa Teresa, a stand-in for 2666’s Ciudad Juárez, a city dominated by both religion and extreme violence. Among the many stops along De Los Santos Arias’ route: a portrait of the traditional Zapotec figure of the muxe, a cisgender man who lives as a woman; a performance in the form of witness testimony by the filmmaker and activist Judit Gómez; and photographs taken from Chihuahua’s archive of unidentified murder victims, evidence of the femicides which make up the unremitting fourth chapter of Bolaño’s novel. The structure of the film is difficult to discern, but throughout there is a constant tension between beauty and encroaching violence as it begins to incorporate increasingly violent stories on the one hand, and on the other images of a raw and vividly present natural world: animals, cacti, dry topography. Santa Teresa and Other Stories seems to use these narratives, images, and dreams as a way of exorcizing the present, to wind it back to a more primitive and innocent state as if curing it of an illness.