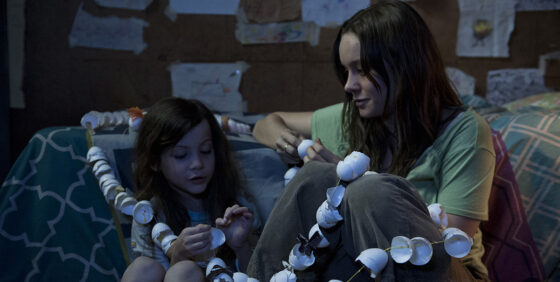 The first thing a reader of Emma Donoghue’s novel Room will notice about Lenny Abrahamson’s mostly sturdy adaptation is a problem of perspective. The impressionistic early montage of mundane objects (a sink and a toilet, which soon become known to us as the talismanic idols Sink and Toilet) quickly gives way to a close-up of the person perceiving them, a 5-year-old boy named Jack (Jacob Tremblay) who narrates the harrowing events of Donoghue’s book in his untrained voice. For an adaptation of a novel distinguished precisely by its hermetically sealed worldview—that of a child born and raised in a small shed, where he and his kidnapped Ma (Brie Larson) live all their days—that omniscient look at Jack seems a cheat—a way to pre-emptively “open up” a text that is claustrophobic by design. Yet Abrahamson’s decision might well be the right one, given the intermittent stiltedness of Jack’s wonder-struck narration (which is transposed from the novel, a bit too faithfully, by Donoghue herself): the naively poetic quality of Jack’s musings, which sound like Terrence Malick by way of the Cat in the Hat, don’t square so well with the adolescent Tremblay’s otherwise nuanced performance.

Once Jack and Ma escape the homely prison of Ma’s captor and rapist Old Nick (Sean Bridgers), Room becomes more Abrahamson’s than Donoghue’s, and the film is all the better for it, ripening into a compelling if at times overly literal bildungsroman about the ways in which space and time shape people. It’s to Abrahamson’s credit (as well as to Ethan Tobman and Michelle Lannon’s finely tuned production design) that the eponymous Room and the pair’s subsequent, suffocatingly huge adoptive home genuinely feel like the separate planets that Jack initially assumes they are, capable of fostering and poisoning very different kinds of life. It goes without saying that Larson, an alert performer who hasn’t yet found a vehicle completely worthy of her, gives a fine performance while silently co-directing her young screen partner in the film’s symbiotic first act. But the most interesting thread of the film belongs to Tremblay and Joan Allen, who plays Jack’s grandmother and effective guardian once the outside world proves too much for Ma: their tentative, mostly wordless exchanges cut through the novel’s sometimes obnoxious nods to Joyce and Woolf, and nudge the film toward a more sensitive and convincing portrait of recovery.