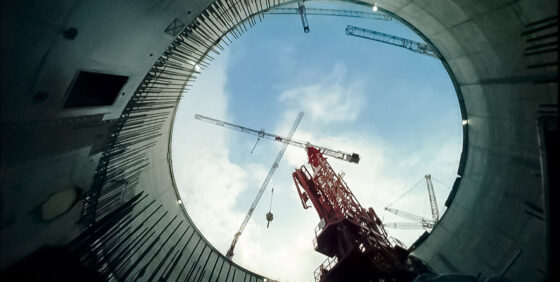 There are plenty of small-town industrial malfeasance stories that could serve as a valid point of comparison for the blinkered corporate idiocy profiled in Return of the Atom, but since it’s the most recent (and most sorely mishandled) let’s choose True Detective Season Two. Instead of the imaginary town of Vinci, California, we have the real town of Eurajoki, Finland, and its adjacent island of Olkiluouto. Once a farming community, Eurajoki was sold out by the city council in the 1970s to Finnish utility giant TVO in order to make the town the home of two of Finalnd’s four nuclear power plants. While Europe curtailed all nuclear initiatives after Chernobyl, in 2004 a third plant was approved for Eurajoki, with TVO teaming up with industry giants Siemens and Areva. The massive OL3 plant, its apologists and opponents, are the subjects of Return of the Atom, the story of a backwater town selling itself to be a literal dumping ground for Big Power.

Stylistically, this is a relatively straightforward post-Michael Moore, clips, file footage, and talking-heads affair. Except for a few old science films (“What is an Atom?”), glibness is replaced by an excess of fast-motion construction shots (especially at night), a two-mode soundtrack (faux-cheery vs. dubstep) by Pan Sonic, and a penchant for allowing industrial demo tapes to indict themselves. When we see footage from a business meeting during which a TVO executive unironically holds up a scale model of the OL3 made of marzipan, and declares that “nuclear power is sweet,” there’s not all that much to add to the mix—though granted, the filmmakers provide more screen time to former TVO electrician turned whistleblower Arto Lauri than any other single interviewee. (Watching his coworkers develop leukemia and unexplained tumours prompted Lauri to conduct his own environmental safety tests, at his own expense.)

So the filmmakers’ attitude regarding Finland’s headlong rush back into nuclear power is fairly clear. But regardless of where one stands on nuclear power, the OL3 has been such a fiasco—mismanaged, over budget, numerous corners cut in safety and construction to meet deadlines that have long since come and gone—that it stands as a testament to shortsighted hubris, the kind that might just kill us all. Scarier, in other words, than shooters in bird masks or those “contracts … with signatures all over ’em!”