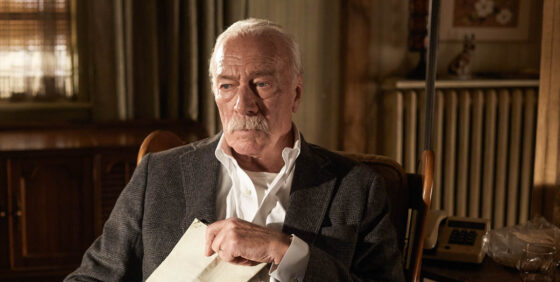 How much of our sense of duty, resolve or morality is merely the aggregate of decisions we made long ago—or decisions that were made for us? From the start of Remember we’ve no reason to feel certain that Zev (a sublimely baffled Christopher Plummer) is acting of his own free will. He lives in a nursing home, his dementia so acute that every time he wakes he believes his wife is still alive. Zev has reminders for every little thing: a Star of David necklace signifies his creed, the numbers on his arm tell him what he’s survived, the letter of instructions given to him by Max (Martin Landau)—who could be either a friend or a sinister Svengali—remind him of his mission. We might think of Remember as Memento (2000) for seniors.

We could also think of it as The Terminator sans the sci-fi as Zev hits the road, bussing his way to Boise and Sault Ste. Marie in search of an old man he’s to liquidate: “Are you Rudy Kolander?” Zev purchases a firearm with appalling ease and sometimes leaves it lying on his seat below a jacket. There are many reasons to regard Remember as a kind of Hitchcockian black comedy, replete with Holocaust MacGuffin—there’s an enjoyably spooky sequence in which Zev finds himself in the home of a neo-Nazi with a German Shepherd named Eva—though it’s hard to suss out how much of this was intended in Benjamin August’s script and how much of it is conjured by director Atom Egoyan. A superfluous denouement aside, Remember is Egoyan’s leanest, cleanest film in years, its protagonist’s foggy mental state offering a tabula rasa upon which the director can project several of his favoured themes to great effect.