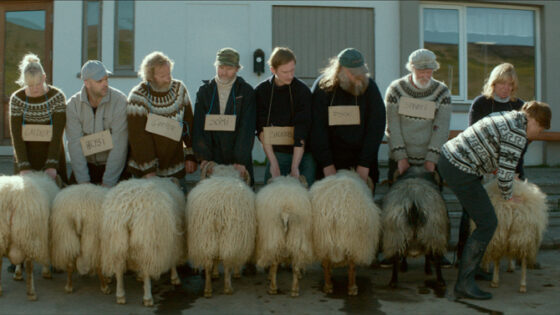 Rams, the second narrative feature by Icelandic director Grímur Hákonarson, represents the kind of thematically familiar, stylistically anonymous filmmaking that comfortably achieves consensus sympathy. Indeed, the film won the top prize of the Un Certain Regard strand at Cannes this year, and against some rather formidable competition at that. As per this breed of fest-feted cinema, aesthetic interest consistently yields to conceptual scenario in this story of two aging brothers (played by the believably grizzled Sigurður Sigurjónsson and Theodór Júlíusson) who live and raise their prize sheep on neighbouring farms in the remote Icelandic countryside.

For reasons that are gradually and undramatically revealed in the film’s methodically unfolding narrative, the brothers haven’t spoken a word to each other in 40 years, tolerating one another’s company only on the occasion of the annual livestock contest or when one is forced to assist the other through their nightly drunken stupours. Of course, a dilemma outside their control—in this case a valley-wide outbreak of the neurological virus known as scrapie, a disease which threatens to infect the brothers’ entire flock—must inevitably bring the two together in a reluctant display of fraternal synergy. Despite a certain pictorial elegance and an admittedly stirring final image (courtesy of cinematographer Sturla Brandth Grovlen, who manned the ambitious single-shot thriller Victoria, also playing at TIFF), Rams is the kind of film whose evident craft belies its lack of adventurousness; its virtues are mostly predictable, its revelations far from revelatory as it plods inexorably from one situational hurdle to another.