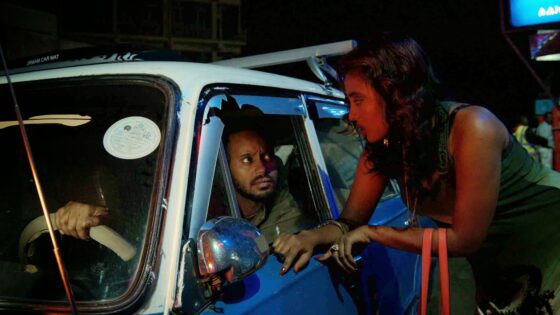 Hermon Hailay’s third feature is a somewhat puzzling melodrama centered on Teddy (Eskindir Tameru), a young Addis Ababa cab driver with a chequered past. His attempt to keep on the straight and narrow is disrupted by a chance encounter with Fere (Fereweni Gebregergs), a beautiful sex worker who is “owned” by Marcos (Kassahun Getatchew), a local pimp. Although the film is technically competent, and Tameru in particular exudes a compellingly twitchy, high-strung screen presence, there is a fundamental inscrutability bedevilling Price of Love that may well pertain to certain constraints on filmmaking in Ethiopia.

One always wants to take a film as is, without special pleading, especially if (like me) you are not an expert on either the culture or the filmmakers involved. But there is something off-putting about the conservative streak that runs through Hailay’s film, particularly with respect to its depiction of Fere. She is not the focus of Price of Love; Teddy is. In fact, the emotional core of the film consists of how tragic it is for him that he has fallen in love with a prostitute, how this messes up his life, how he wants to save her from “the life” but she keeps lapsing. This is especially troubling since—wait for it—Teddy’s dead mother was also a sex worker. (Zero Freudian overtones here. Really, none.)

Given that Hailay, a woman filmmaker, has written and directed a movie about how women in the sex industry bring good men low, I can only wonder whether, within the given context, it represents a feminist gesture to simply depict Fere as a human being. If this is in fact the case—and again, I am merely conjecturing here, since I have no real knowledge on the matter—it would only serve to make Price of Love a somewhat interesting sociological artifact, not a good film by any meaningful metric.