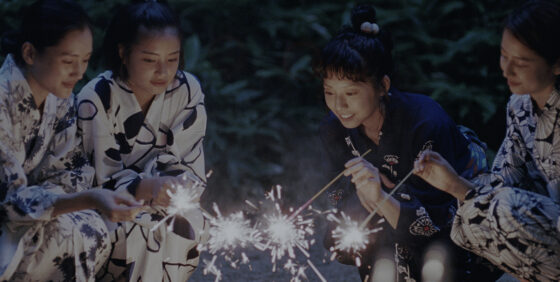 Surely the most demure manga adaptation in cinematic history—there isn’t a single bad-touching tentacle in sight—Our Little Sister finds Kore-eda Hirokazu in Ozu mode. With its numerous floor-level views of women sitting in repose and its structuring motif of changing seasons, the film could be taken as a tribute from one Japanese auteur to another, except that this comparison at once overrates and understates the film’s level of accomplishment. After the controlled but soapy dramatics of Like Father, Like Son (2013)—which was so obviously potent that Steven Spielberg bought the remake rights—Kore-eda has fashioned a relaxed, even wispy ensemble piece that dares to make do without a plot. Three under-thirty and upwardly mobile sisters meet their estranged fourth sibling—a 15-year-old girl who seems wise and melancholy beyond her years—and quickly resolve to adopt her. This means whisking her away to the beach and integrating her into no-boys-around household whose relaxed rhythms belie shared emotional damage from being discarded 15 years earlier by their parents. (The abandonment of children continues to be this filmmaker’s major theme). Kore-eda adapted the script from Akimi Yoshida’s popular graphic novel Umimachi Diary, and while I can’t say if he’s been faithful to his source material, the various digressions and dualities certainly feel literary (there are a lot of loaded dialogues about cherry blossoms, for instance). It’s all quite masterly, if a bit boring—and the otherwise lightly pleasant tedium is not lessened by having anime veteran Yoko Kanno’s distractingly saccharine score liberally drizzled over Kore-eda’s images.