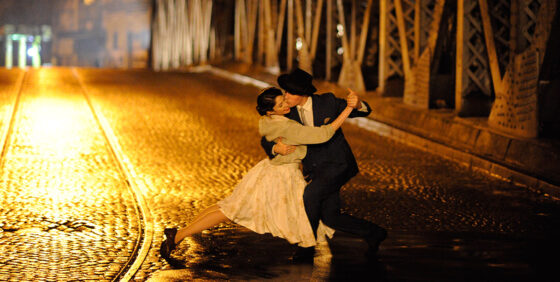 We all know it takes two to tango, and that’s a problem for this mildly engaging but lop-sided strut down memory lane with Maria Nieves Rego and Juan Carlos Copes, the Ginger and Fred of Argentine tango. Maria, at 80, is eager to revisit the past, reminiscing about dancing with the broom in her mother’s kitchen, how the dashing Juan Carlos swept her off her feet in a Buenos Aires milonga (dance hall), and how the dance’s fading popularity in the early ’50s only spurred her partner’s creativity: if they were no longer welcome in the clubs, he would put tango on the stage. And once the duo had conquered Argentina, he soon had Broadway in his sights. She gives Copes the lion’s share of the credit (on this they agree), but blames him for throwing away their romance and (nearly 30 years later) scrapping their professional partnership.

Three years her senior, Juan Carlos is more guarded and aloof. Unlike Maria, who interacts animatedly with the (top-notch) dancers director German Kral casts to recreate the pair’s youthful glory, he is nowhere to be seen. As for the “last tango” promised in the title, Kral (a Wim Wenders protégé) doesn’t seem to have the coverage he needs; it’s decidedly anti-climactic. Archival footage also fails to do them justice. Still, Maria’s candid and hard-earned observations on love and sex have some piquancy. “I’ve come to the conclusion that love is a lie,” she says. “A woman must use a man, then throw him away. Any tears shed over a man are a waste.” It’s a sentiment worthy of the dance she’s dedicated her life to perfecting.