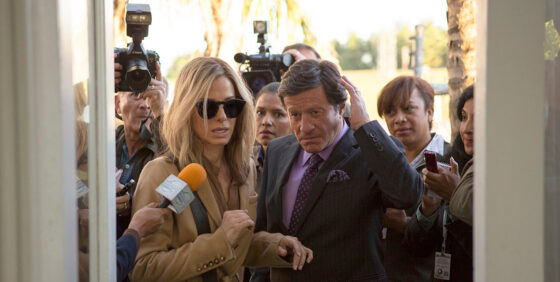 A fictionalized, present-day reimagining of Rachel Boynton’s terrific 2005 documentary of same name, Our Brand is Crisis would have an uphill battle on its hands even if it were a masterpiece, which it most certainly is not. David Gordon Green’s latest is instead a pleasant enough if decidedly un-hip studio diversion starring Sandra Bullock and Billy Bob Thornton as sociopathic American electioneers who find themselves at loggerheads over a Bolivian presidential race. It’s in keeping with Boynton’s original that the narrative centres less on Bolivian politics and more on gringo strategists; Bullock plays “Calamity” Jane Bodine (a synthetic concoction by screenwriter Peter Straughan), called in for One Last Job to refurbish the destitute campaign of former right-wing president Castillo (Joaquim de Almeida, who incidentally played Bolivian president Rene Barrientos in Steven Soderbergh’s Che [2008]). Thornton’s Pat Candy is a thinly veiled version of diehard Clinton campaign manager James Carville, who is prominent in Boynton’s film but was made most famous in the documentary The War Room (1993).

Beltway snake oil is the order of the day, then, and for a workplace comedy about career politicos, Crisis does a far nimbler job than expected avoiding both over-reductiveness and over-exposition. Initially, it’s a breezy comedy about Bodine’s gawky re-entry into the spin cycle; then it’s an absurdist travelogue of Bolivia via the warring campaigns, whereby Castillo’s gruff anti-electability makes him a lovable dark horse for the audience, even while his attitudes towards the actual electorate look worse and worse. The realization that Crisis is asking its viewers to root for the bad guys gives way to a pleasant tonal schizophrenia on Green’s part as Bodine and her fellow operators get sucked into the campaign vortex, but it never gets truly dangerous—liberal-friendly bromides are never far off, like when Castillo adviser Ben (Anthony Mackie) offhandedly tells a staffer that “Sometimes a leader has to do what’s right for their country, whether the people want it or not.”

Inevitably, the high human toll of Candy and Bodine’s hired-gun cynicism rears its ugly head, and Our Brand is Crisis turns downright pedantic. Whether these anti-heroes believe their own bullshit is well beside the point, as they’re committed at least until the job is finished, but in the film’s painfully rushed final act Jane begins to realize the consequences of her power moves, capping Crisis with a painfully forced message-picture catharsis that represents way too much reality, too late. Actual Bolivian history (including the 2006 election of Evo Morales, Latin America’s first indigenous president) might as well not exist for Crisis’ interminably syrupy coda. In her rude awakening, Jane comes to resemble a protagonist more “relatable” and (albeit by accident) more pernicious: the do-gooder expat, tromping around the Global South looking to make a difference. Until then, Our Brand is Crisis is as good as a Hollywood film about private-contract electioneering in Bolivia could possibly be—and perhaps better.