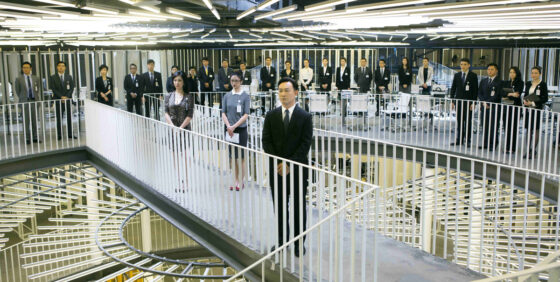 If Hou Hsiao-hsien can make a martial-arts fantasy, then Johnnie To can damn well make a glossy musical. And with Office he has, and it’s splendid. More of a musical than Hou’s The Assassin is a swordfest, Office has, if I counted correctly, ten new songs (some only a few bars long), all composed by ’80s Taiwanese hit-crafter Lo Taiyu. They may sound a tad dated, but they are sharply expressive, cleverly constructed, give real melodic pleasure, and move the story along like well-designed modern musical-theatre songs are supposed to.

Though the film is graced by the power couple of Chow Yun-fat and Sylvia Chang, the true star of Office—which is based on a Sylvia Chang drama called Design for Living (not an adaptation of Noël Coward)—is the design itself. Wong Kar-wai’s inspired art director William Chang has concocted a highly stylized vision of a postmodern office setting: a theatrical, open-concept, multi-storied abstraction of a contemporary financial firm, complete with lobby and adjoining metro station. As fundamentally structuralist as ever (though he hides it well), To stages the complex romantic and financial-scheme-devising interactions of his stellar cast with a fluency that dazzles. Chow and Chang play the bosses/lovers/rivals, though they sing much less than Eason Chan (who has a lovely, professional voice that is showcased with the most ambitious songs) and Tang Wei (serviceable vocally, but dramatically fine); the “ingenue” couple, Wang Ziyi and Lan Yueting, have all the fresh energy and appealing presence necessary.

There is a lot of fast-paced dialogue (spoken and sung) about financial instruments, accountancy dodges, and various other arcane financing details I had thought would be utterly resistant to the romantic/farce/drama/musical genre, but To and screenwriter Sylvia Chang design, energize, and stylize it all into a sharp confection that’s brilliantly enjoyable—a crystalline counterpoint to Life Without Principle (2011), To’s savage critique of the same rotten system.