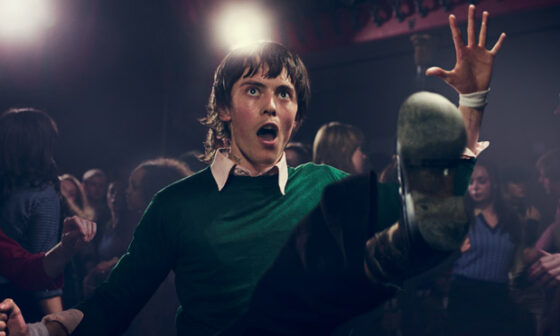 Given that these online reviews offer a comments section, I’d like to invite readers to chime in here, as if we were doing a radio call-in show: did anyone who attended TIFF this year, critic or regular filmgoer, actually see any of the City to City films? Honestly, I haven’t heard a peep about the section this year, and this isn’t entirely surprising. The selection of London reeks of desperation, or a last-minute solution in light of something else having fallen through. It’s not just that British cinema hasn’t exactly been setting the world on fire for, oh, the last thirty-plus years. It’s the fact that choosing London for this kind of showcase—previous cities have included Seoul, Athens, Mumbai, Buenos Aires, Istanbul, and the debut of the section in 2009 with Tel Aviv—is sort of bizarre in terms of colonial history, to say nothing of present-day geopolitics. (Next stop: Los Angeles?)

Having said all this, the proof is in the films themselves, and Northern Soul is unwatchable. If you want to see a subculture spring from the grim morass of 1970s England, specifically the urban (white) poor and the failure of the welfare state, then naturally you’d want to see this through the eyes of a youth-obsessed fashion photographer making her feature-film debut. So Elaine Constantine gives us the most art-directed council housing you’ve ever seen outside of a Madness video. The prominent graffiti (“BURNSWORTH IS A SHITHOLE”) looks professionally applied, which of course it was. But it turns out to be the rebellious handiwork of our protagonist John Clark (Elliot James Langridge), who is stuck in Lancashire with his square parents (Christian McKay and Lisa Stansfield, both dowdy and sub-Loachian) and loved by his dying, presumably Old Labour grandpa (Ricky Tomlinson) who has been sent to an old folks’ home to die. John, meanwhile, discovers soul music and amphetamines by getting in a fight at the youth club and meeting record geek Matt (Josh Whitehouse), who becomes his bestie. John becomes empowered. John learns to dance. John starts wearing cool shoes. John gets the courage to flirt with the hot girl on the bus. John stands up to his mean vo-tech instructor (Steve Coogan, financing a swimming pool), fists raised, triumphant. And so on.

Buy the soundtrack. Avoid this film.