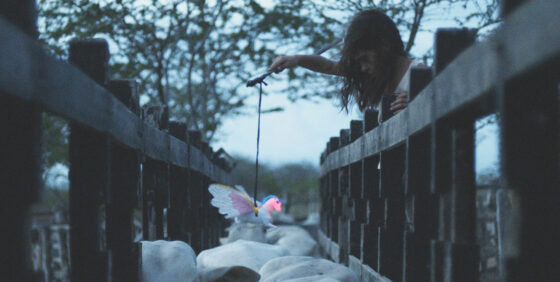 Expanding upon the sensual neorealism of his dramatic debut August Winds (2014), Gabriel Mascaro sets his follow-up behind the scenes of northeast Brazil’s vaquejada circuit. A few cowhands ready the bulls for rodeo, sanding tails, branding, cursing. They camp alongside the bullpen with a mother and daughter living in their truck, and scene by scene an improvised family unit emerges along the lines of a quieter, dustier Alice Doesn’t Live Here Anymore (1974). Balancing an ethnographic appreciation for the working terrain and a comic sense of social relationships, Neon Bull doesn’t settle into any single tone for the sake of its characters, especially the protagonist Iremar, whose no-bullshit demeanour accommodates a passion for fashion (he sketches his designs atop the nubile bodies of a skin mag). As in August Winds, Mascaro recognizes the overlapping social and dramatic possibilities of incidental encounters: a travelling salesman’s pitch for “sexy panties,” a horse groom taking a few bucks to sneak the cowhands into an auction to steal a prize stud’s sperm, or a denouement in which one of the labourers is unexpectedly rewarded for his smooth handling of a feisty mare. This last is a very funny scene that nonetheless demonstrates the workers’ lack of control: one word from a boss and the hired hand exits stage left. The film’s many internal frames bring bodies together—sex is in the air—but they also suggest people making do with the fences that are a fact of life.