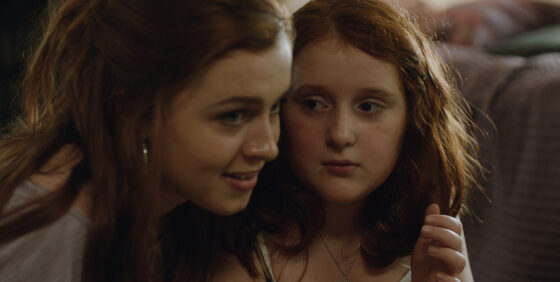 Although some critics will undoubtedly refer to Saana Lenken’s film about teenage bulimia as Afterschool Special material, let’s be clear: no American or Canadian film would approach the seriousness or cruelty with which Lenken addresses her Swedish audience. More than once, the relationship between Stella (Rebecka Josephson) and her sister Katja (Amy Deasismont) veers uncomfortably into Catherine Breillat territory, and these are the moments that make My Skinny Sister much more worthwhile than the usual PSA, however noble the cause. Stella is the younger, somewhat heavier sibling to Katja, a competitive figure skater whose obsessive exercise routines, maniacal dieting, and too-frequent trips to the washroom all start to make Stella think there’s something wrong.

Lenken complicates matters by having the kids’ parents be obsessive and oblivious in their own ways, but not cartoonishly so. This means that Stella and Katja seesaw between parenting and nurturing themselves and one another, and when this dysfunction turns dark—Katja shames Stella, physically and sexually whenever her secrets are at risk of being exposed—it’s a dynamic that is both familiar and unnervingly perverse. Stella’s budding desire, channelled as it is toward Katja’s skating coach (Maxim Mehmet), is low-hanging fruit for embarrassment. And Stella’s confusion is only compounded by her bemused observation of the male attention Katja receives, knowing as she does that it is earned through self-destruction. Josephson, who is Erland’s granddaughter, is a great young actress, registering the combination of envy and repulsion necessary for the Stella role. Being just to the side of culturally sanctioned femininity, Stella has a front-row seat for misogyny and its internalized brutality.