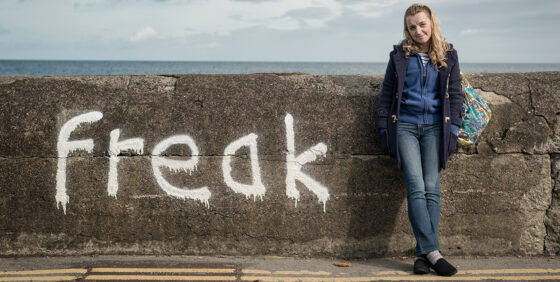 This story of a troubled teenaged girl (Harry Potter actress Evanna Lynch) taking a road trip to retrieve her father (Michael Smiley) from a mental institution seems to have the potential to break with the clichés of the coming-of-age template. Emily’s mother died when she was young, and Dad eventually became so overcome with grief that he was no longer capable of caring for his daughter, and although Emily bears the scars of this abandonment, she actually lands in a very decent home with a compassionate foster mother—possibly a cinematic first. Nevertheless, once Emily meets sensitive rich boy Arden (George Webster) and the two hit the Irish countryside, Simon Fitzmaurice’s film is achingly predictable in both plot and technique. Meet-cutes, flashbacks to happier days, the boy’s wonder and befuddlement at this damaged Manic Pixie, sappy sub-Sarah McLachlan music cues, and a rainbow in the morning over the tent where Emily and Arden shared the night—this is strictly straight-to-video material.

The most interesting elements of Emily, actually, are extra-textual. Fitzmaurice, a noted memoirist, was diagnosed with neuron motor disease in 2008, and is now paralyzed. (He dictated the script and directed using eye-gaze technology.) We can see a concern with bodily freedom haunting My Name is Emily. Emily’s dad, before becoming mentally incapacitated, was a self-help guru advocating sex and swimming as the keys to happiness. And when Emily refuses to conduct a classroom formal analysis of Wordsworth’s “Ode: Intimations of Immortality from Recollections of Early Childhood,” it’s because dissecting the poem would distract from its basic sexual nature. Fitzmaurice is telling a tale that is not particularly new or interesting, but he seems to be imploring us to enjoy the sensations of the physical self while we can.