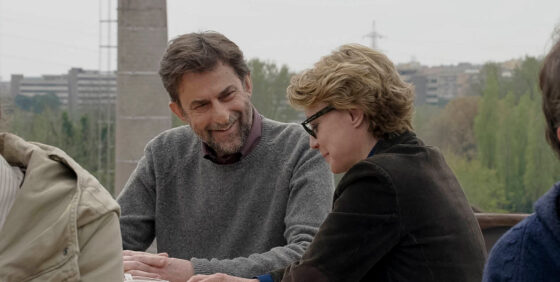 If there is any accomplishment to be ascribed to Nanni Moretti’s cinema at all, it would be that it celebrated the irony-less cult of the self long before the word “millennials” entered the vocabulary of marketing gurus. Though already suffering from an indigestible dose of self-obsession, Moretti’s early films were about an historical moment and the generation that was trying to survive it, but the rest of his oeuvre lost any connection with anything outside the orbit of the filmmaker’s own, cheerless self. My Mother admittedly is a welcome exception in this cinema of autistic self-reference, but it shows how difficult it can be for a man in love with himself to convincingly frame something outside of his maniacal control—the something in this case being the imminent death of a loved one. Margherita Buy plays Moretti’s alter ego, a film director working on a lame social drama about workers occupying a factory who struggles to make sense of her mother’s impending death as well as the pointless film she’s working on. Moretti himself plays her self-sacrificing brother, the balanced and caring one, of course.

The disappearance of the person that brought you into this world can indeed be a devastating experience, but the way Moretti’s protagonist deals with it seems somehow at odds with her character’s demographic. On top of this existential inadequacy, Moretti displays a fundamental inability to build any kind of momentum, be it emotional or narrative. The film alternates between reality, flashbacks, dreams, and hallucinations as experienced by the protagonist, only to get immediately tangled in itself as both directors—Moretti and his alter ego—deliver a mess of a film that remains illegible as the chronicle of wo/man’s painful travail. Praise and thanks to John Turturro for bringing some comedic solace to an otherwise burdensome film.