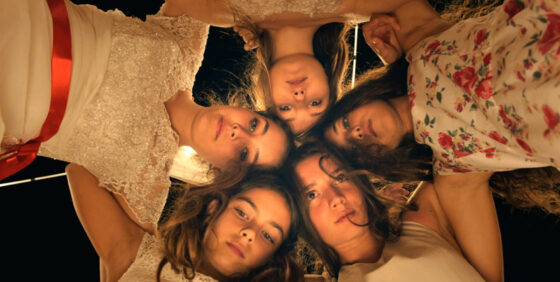 As a film about adolescent girls, told from the perspective of adolescent girls, Deniz Gamze Ergüven’s debut feature Mustang immediately stands out amidst the largely male-dominated efforts of contemporary cinema, its concerns distinctly feminine in constitution, its context specific in circumstance yet universal in scope. In a secluded Turkish village along the banks of the Black Sea, five orphaned sisters are being raised by their grandmother and uncle in an atmosphere of sexual, religious, and ideological repression. They’re physically reprimanded and verbally chastised for harmlessly cavorting with their male classmates, kept under strict house arrest during the summer months, and forced to submit to virginity tests as their guardians furiously arrange for their individual marriages to local Muslim boys. In an early scene one of the sisters forlornly describes the house not as a home, but as a “wife factory.”

Strange and involving, the opening act of the film proceeds something like a culturally reconstituted The Virgin Suicides (1999) or perhaps a less arch, more pastoral Dogtooth (2009). In this case the girls prove to have little trouble fooling their elders, and embark on a series of youthful exploits outside their domestic confines. One of the best sequences in the film finds the sisters lying and bribing their way across the city and into the crowd at a FIFA game, a moment which calls to mind Jafar Panahi’s Offside (2006). But Ergüven seems less interested in the political than the personal, focusing on the familial and psychological ramifications of the sisters’ situation and their attempts at rebellion (the adults, by contrast, essentially remain caricatures). Each girl responds in a different way to the tyrannical treatment, and the narrative moves accordingly from comedy to tragedy to, in the case of the two youngest and most restless sisters, epiphany. All told it’s an understated, undemanding journey, and if the worst one can say about a film by a first-time director is that it (not unfavorably) resembles other, better films, then that bodes well for Ergüven’s future.