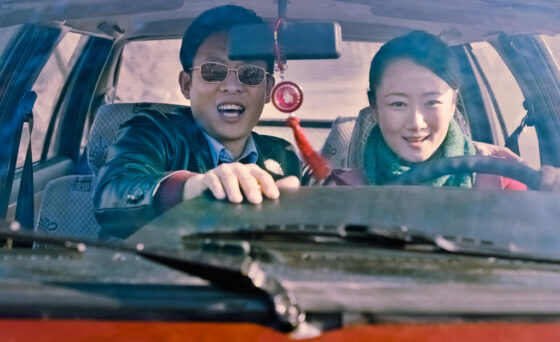 At the start of JZ’s new joint, following the forest-green Chinese Film Bureau censorship logo and toot-tooting fanfare comes the admonition to “Go West” from the Pet Shop Boys, in good old 1.33. I doubt the Boys ever though they’d be addressing the Chinese masses yearning to break free, together, of the yoke of communism and start raking in the dough. An ambitious illustration of how the forces of history operate on both the lumpen and the moneyed, part one of Mountains May Depart begins in the good old coal-mining town of Fenyang at the start of the millennium, where we find good old Zhao Tao as the tip of a love triangle, eventually opting for money (asshole capitalist Zhang) over love (poor coal miner Liangzi), and giving birth to a son, Zhang Dollar. Part two, set in 2014, shows how money can’t buy you love, as mother and Dollar have long separated, with Tao remaining at home. And part three shows just how much it’s going to suck for Chinese émigrés in an Apple Watch-free 2020 Australia, where Dollar is now Peter and hot for teacher, clearly a mother surrogate (an ex-Torontonian, played by Sylvia Chang!).

As always with Jia, the moments of personal grace (anything with Zhao Tao) and unique oddities (what was that plane crash?) are too numerous to list, though at Cannes, and I expect elsewhere, Jia was much maligned for his third-part foray into the English language—the key futuristic device he allows himself is a simultaneous translation machine to abet father-and-son communication. Indeed, a lot of the acting is abominable to Western eyes and ears, but far from Sino-pudding, Mountains May Depart is a daring attempt from a filmmaker who is fully embracing his position and duty as a national Chinese artist. (Jia is so important that they named the juried award at the Toronto film festival after his masterpiece…and he gets to sit on the jury!) He’s shooting off a warning flare to his intended audience of countrymen and -women about what happens if (or when) they surrender blindly to the Western desire for freedom. Make no mistake, that forest-green dragon logo is an inextricable part of the film.