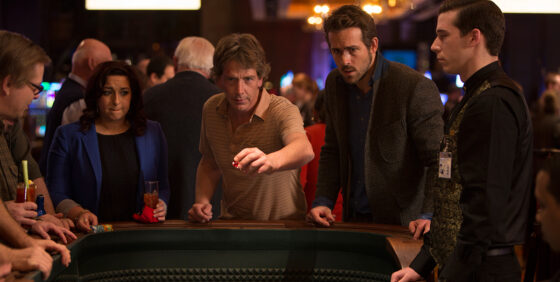 Having long self-diagnosed myself with an addictive personality, combined with a rather unhealthy relationship with money, I dread movies about gamblers. So while watching Mississippi Grind, I spent half an hour standing at the back of the theatre, ready for my exit. But I never left, eyes drawn to the screen as if fixated on the action at an animated craps table. Owing a lot to Anna Boden and Ryan Fleck’s extensive research, the gambling world presented in the film feels instantaneously familiar. But the writer-directors are less interested in the games themselves than in the players and their mannerisms.

They ease our introduction into this habitat through Curtis, played by Ryan Reynolds with his charisma tap open all the way. Unusually comfortable with the game’s stakes, he forms a partnership with Gerry (Ben Mendelsohn), a specimen of a whole other species. A good poker player but a bad gambler, Gerry is unable to resist the call of an elusive windfall. Mendelsohn is irresistible as this sweet, funny man you hate to have to abandon to his misery. Curtis can’t, and as the pair goes on the road and down the Mississippi river on a circuit of bluesy gambling dens, the film becomes a beautifully romantic friendship story. And indeed, despite a handful of varied and convincingly interpreted female characters, women are mostly intruders in this male world, sad reminders of the responsibilities that come with living as a member of society or, worse still, of a family.

Mississippi Grind not only refuses to indulge in the easy pleasures of dramatic momentum, but it pushes its luck by meandering towards a bizarrely extended series of possible endings. This reluctance to conclude, and the consequent suspension of our judgment on the characters and of their fate’s resolution, seems to point to a burning desire on the part of the filmmakers to be directing this story as a TV series instead. Suitably, you could forever reactivate the cravings of a supposedly retired gambler and start a new season.