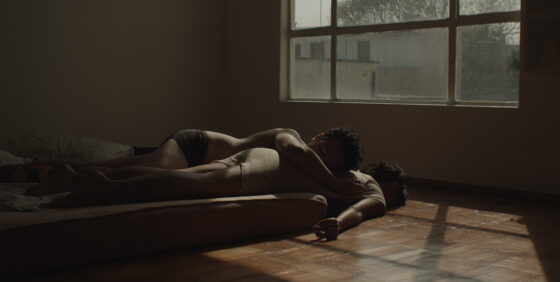 Nicolás Pereda’s recent work, particularly his last two features Greatest Hits (2012) and Los ausentes (2014), already represented a substantial reduction of means when compared to the relatively action-packed Perpetuum Mobile (2009) and Summer of Goliath (2010). But with his latest, Pereda has achieved a genuine comedy of stasis. How much further away from his (admittedly ironic) “perpetual motion” could Pereda move? Minotaur consists mostly of three individuals (Gabino Rodríguez, Luisa Pardo, Francisco Barreiro) hanging around an apartment, taking turns sleeping and reading books. It’s a lovely paean to Pereda’s forebears in this arena—Warhol and Garrel come to mind, although the vibe is quite different, demonstrating to the gainsayers that there really are many different varieties of lassitude. (In fact, Minotaur more directly resembles the recent short films of Laida Lertxundi, although her denizens bond over LPs, not volumes of poetry.) There’s an unassuming nostalgia permeating Pereda’s film, not only for the “hanging-out film” but also for books themselves, and a very distinct timeframe that Pereda perhaps thinks we’re on the verge of losing—in other words, down time. Nobody’s staring at smartphones here. We can all nod off in perfect peace, and perhaps even fall asleep next to one another in the afternoon, maybe like we did between classes in college, or during those months spent on the dole. But of course, no one can live in the liminal forever, and before long an invader (the metaphorical minotaur of the title?) comes to collect. (Down time has to make money for someone, and hey, can I charge my cell phone here?) These kids are lost, and before you know it, they’re slumped over, eaten alive.