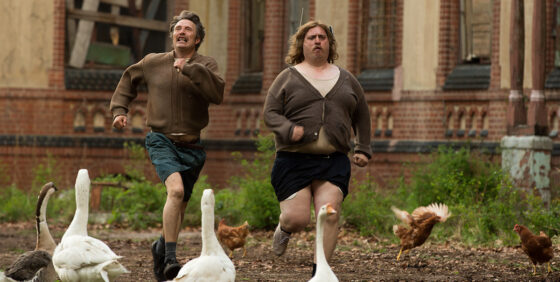 Not only Anders Thomas Jensen’s best directorial effort by a country mile (faint praise, that), but far more satisfying than many of his scenarios for other, better directors, Men & Chicken is a black comedy about extreme family dysfunction. What begins as a kind of odd-couple brothers’ tale soon goes way off the rails. Nerdy Gabriel (David Dencik) is in the process of losing his girlfriend when his ailing father dies. This forces a reunion with Elias (Mads Mikkelsen, leathery and lubricious), who is rude, obnoxious, and has a perplexing need to jerk off on the regular. What seems like an absurdist take on sex addiction, we soon learn, is something . . . else, and a posthumous confession by Dad sends the brothers to the island or Urk to find their real father, a mysterious geneticist named Thanatos.

In certain of its particulars Men & Chicken is akin to Yorgos Lanthimos’ modern classic Dogtooth (2009), given its focus on an insular group of siblings seemingly sequestered from the larger world by an insane patriarch. But really, in its approach to sex, bodies, fauna, and a general taste for icky-sticky mise en scène, Men & Chicken is a kissing cousin to the outré Hungarian cinema of György Pálfi, specifically Hukkle (2002) and particularly Taxidermia (2006). As the title implies, people and animals share pride of place in the film’s unstable universe, and this inattention to boundaries—with bulls, goats, and chickens living in the house and sleeping alongside the Brothers Thanatos—is a big honking clue to what’s up. As with so many of Jensen’s scripts, it’s not hard to discern what’s happening long before it’s revealed. Still, the comic-surreal atmosphere and rule-governed perversity are satisfying throughout, and Mikkelsen’s clueless-asshole deadpan is a hoot.