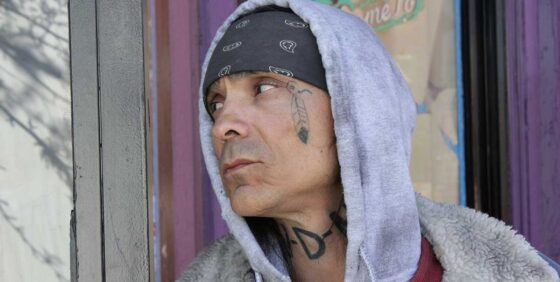 The once fresh idea of integrating a vérité sensibility into drama has grown, in recent years, into one of the most recognizable trends in independent cinema. Adding to this modest lineage is Mekko, an agreeable if unremarkable work of indigenous realism whose familiarity of form is ably offset by the singularity of its milieu. Directed by the Native American filmmaker Sterlin Harjo, the film centres on Muscogee-bred ex-con Mekko, just released from a 19-year prison stint for murder, as he attempts to re-establish himself in contemporary Oklahoma, where communities of mostly homeless Creek Indians continue to persevere against a backdrop of drugs and urban development.

Played by Rod Rondeaux (a Hollywood stuntman whose ethnic background has mostly relegated him to the background in genre films such as 3:10 to Yuma [2007] and The Lone Ranger [2013]), Mekko is hulking yet gentle, soft-spoken yet articulate. He’s enough of a galvanizing presence to anchor some of the film’s more fantastical forays, which largely manifest themselves in ruminative, vaguely existential voiceover passages which intermittently take the film away from the small-scale Americana of Minervini (whose new film The Other Side, also screening at TIFF, touches on similarly bleak subject matter in a corresponding Midwest locale, to much stronger results) and towards the astral realm of Malick. By and large, however, the rural realism of Minervini works as a handy aesthetic analogue for Harjo’s approach, which is generally unobtrusive in its inquisitiveness. An unexpected third-act turn into a kind of violent revenge fantasy confirms that this young director is at his best when simply allowing his feel for the rhythms of the real to guide his course.