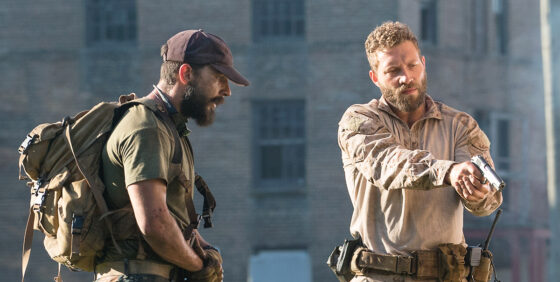 Dito Montiel’s Man Down is a visionary work of abstract cinema—a haptic masterpiece that overwhelms the viewer through the sheer scale of its imagery. Then again, I was sitting in the front row of a press screening held in an IMAX cinema, so your mileage may vary. Chances are that those audience members sitting further away from the screen perceived a rather ridiculous mélange of homecoming-drama and dystopian-thriller clichés, each superimposed over the other in an attempt to create something like complexity.

We open on the end of the world, “America We Have a Problem” spray-painted on the side of a ruined building. In these lean times, ex-Marines are uniquely equipped to survive, and so Gabriel (Shia LaBeouf) and his buddy Devin (Jai Courtney) more or less rule the landscape. Packed and strapped, they’re on the lookout for other survivors, including Gabriel’s wife and child, who we meet in strategically parcelled-out flashbacks. It seems that everything went kablooey while our hero was overseas in Afghanistan, but the time-jumping structure makes it hard to tell exactly what’s going on—which is of course exactly how Montiel, the would-be-blower of minds, wants it.

All of this ellipticism comes in the service of some pretty blunt points about post- traumatic stress disorder—namely that it’s bad and that it would suck to suffer from it. That’s the upshot of LaBeouf’s performance, which offers the kind of prefab intensity that suggests an actor trying to exploit a role instead of inhabiting it. But at least he’s trying; as a military psychiatrist assigned to Gabriel’s case, Gary Oldman does as little as possible to appear interested in the material. Not that anybody could blame him.