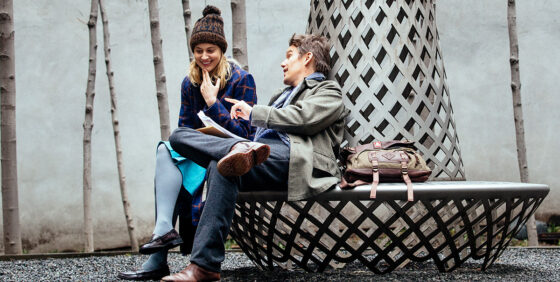 No, it’s not an alternate title for the Thatcherite satire of High-Rise: Rebecca Miller’s abrupt slide into conventionality after a string of spiky efforts follows the Machiavellian machinations of a thirtyish single gal (Greta Gerwig) who steals the writer husband (Ethan Hawke) of an eccentric academic (Julianne Moore) and then tries to hand him back several years and one baby later—a homewrecker in reverse. The partner-swapping hijinks and New York-intellectual milieu suggest a host of obvious antecedents (Allen, Baumbach, and worse), and at times Maggie’s Plan suggests an entire iTunes library of highbrow off-Hollywood comedies being played on shuffle. There are less entertaining propositions, I suppose, but starting with Gerwig’s oddly somnolent performance, everything here is so safely soft and foam-coated as to muffle the intended funniness. Hawke is of course convincing as a monstrously self-involved author, while Moore puts on an absurd pan-European accent to play a woman whose brilliance has rendered her aloof, controlling, and sweetly clueless. It’d be nice to say that these fine actors are better than their material, but I’m guessing that they—like Gerwig and their director—think that Maggie’s Plan is in fact a poised rejoinder to empty, accessible rom-com clichés. They’re incorrect.