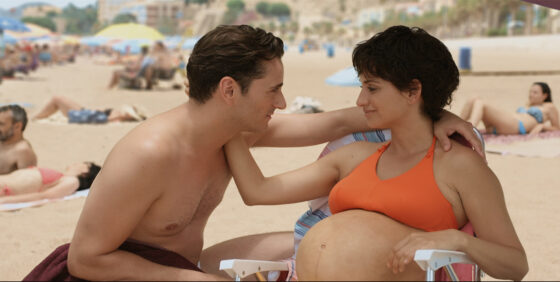 This batshit-crazy mega-weepie from Sex and Lucia (2001) director Julio Medem begins with Madrid schoolteacher Magda (Penélope Cruz) newly unemployed, her philandering philosophy professor husband vacationing on the Costa del Sol with his younger blonde lover, and the discovery that the lump in Magda’s breast is malignant and a mastectomy is required. Magda goes directly from her sobering appointment in the world’s whitest, cleanest, tidiest hospital to the soccer game where she meets handsome and kindly Arturo (Luis Tosar), a scout for Real Madrid who declares that Magda’s adorable little boy has real talent. Moments later, Arturo gets a call informing him that his family has just been in a terrible car accident, his daughter is dead, and his wife is in coma. Magda rushes him to emergency, where she’ll visit him every day. Might unfathomable tragedy pave the way for new romance? You don’t know the half of it. ma ma has only just begun.

Cruz is one of ma ma’s producers, which suggests that one of her lifelong ambitions was to out-do Joan Crawford. As Magda’s Job year chugs along, the schmaltz accumulates to near-surrealist heights, peaking around the scene in which the singing gynaecologist serenades Magda—now both terminal and pregnant—with an excruciating, verb-laden ballad at a beachside restaurant. Magda dies gracefully and gorgeously à la Sweet November, making everyone happy because everyone is so nice. You might wonder what sort of vacuum Magda lives in, given that she apparently has no family or girlfriends. You might wonder why sex scenes always cut away to an animated sequence featuring cute internal organs. (I hear that in an earlier cut, Arturo is actually gay.) Above all, you might wonder if this is actually intended as a parody of melodrama. This could almost be the stuff of Guy Maddin or Almodóvar, but there is no punchline forthcoming, nor is there evidence that Medem is in any sort of control of his material or the film’s tone.