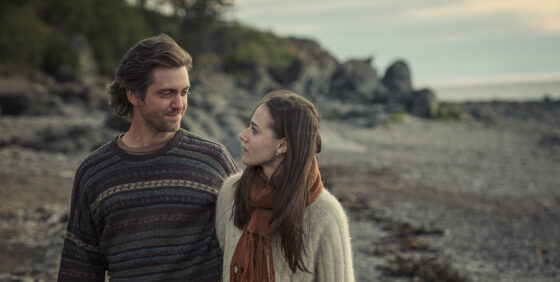 Anne Émond bests fellow French-Canadian whippersnapper Xavier Dolan in the Now-That’s-What-I-Call-’90s-Music department in Les êtres chers, as Blind Melon and Elliott Smith give way to Pulp (“Common People,” naturellement). That the first two (dead) artists specialized in songs about suicide and the latter made a habit of we-love-life anthems offers a hint as to the affirmative arc of Émond’s film, which concerns a lower-St. Lawrence clan caught in the grip of hereditary depression. As the young pater grappling with the revelation of his father’s suicide and its possible implications on his own mental health (and the happiness of his wife and two children), Maxim Gaudette has the bruised comportment of somebody who’s gotten used to smiling through tears. In the early scenes, he writes a traditional ballad in the voice of a man planting a tree to sublimate his pain, the success of which becomes a running family joke; underneath the one-hit wonder conceit lies the sort of deep-rooted literary metaphor that requires careful cultivation by a filmmaker and her cast. Les êtres chers may be over-deliberate (and it has just about as many endings as Dolan’s Mommy [2014]), but Émond has outgrown the showiness of her debut Nuit #1 (2011) and improved as both a dramatist and a director of actors. There are sequences of genuine sensitivity here, and a sense of family history as a sprawling, living thing that evokes Olivier Assayas in his domestic-epic mode. But the summer hours here are cast in a long shade.