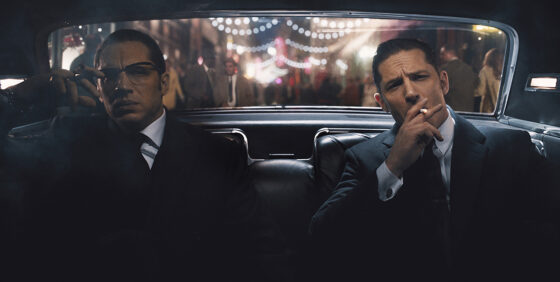 Last year, Tom Hardy came to TIFF with The Drop, a drab Brooklyn crime film that afforded its star the opportunity to talk like Adam Sandler; this year, with the Kray brothers biopic Legend, we get two strenuous Hardy vocal performances for the price of one. Perish the thought that our man of a thousand accents was going to only go off half-Cockneyed: Hardy thins and lightens his voice to play soft-lipped smoothie Reggie Kray and thickens it into gruel as Reggie’s sociopathic pussy-hound twin bro Ron, and in both cases, the auditory illusion is impressive without being especially convincing. The same goes for the digital trickery that permits these dead ringers to share screen space (and even trade blows) although that has less to do with the quality of the editing or special effects than the distracting artificiality of Brian Helgeland’s filmmaking. “London, in the 1960s,” intonesReggie’s wife Frances (Emily Browning) over a CGI-enhanced skyline, inviting us into an ersatz past that keeps conflating street-level civic history with memories of crime dramas past: when Reggie takes Frances through the nightclub he operates as a front for his gangster empire, the snaky, single-take camera movement nods to Goodfellas, while Joe Mantegna cameos to beef up the production’s Mafia genre cred. We get the usual array of dust-ups, throw-downs, and backstabbing both figurative and literal, all of which is justified by the historical record and yet does little to illuminate the meaning and legacy (if indeed there is any) of two petty hoods who brutalized their way to infamy and fortune. There’s more wit, insight, and dangerous male eroticism in the three-and-a-half minutes of Morrissey’s “Last of the Famous International Playboys”—a disco love song from the point of view of a Kray-crazed gang-banger—than this entire two-hour movie.