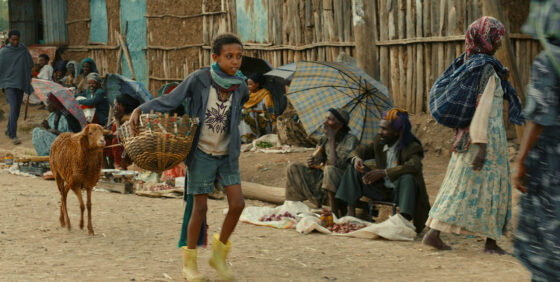 This year there are two films titled Lamb on the festival circuit. Both are coming-of-age tales. Both have lambs. Kutluğ Ataman’s Lamb is about a boy in rural Turkey who needs to be circumcised, and is told that he’ll be slaughtered and eaten if they can’t buy a lamb for the celebration feast. This other Lamb is the debut feature of Ethiopian director Yared Zeleke, and follows Ephraim (Rediat Amare), a nine-year-old boy in a small village afflicted by drought whose one and only friend is Chuni, the lamb he inherited from his dead mother. When his father has to go to Addis Ababa to work, Ephraim is left with his uncle’s family, whom he wins over with his precocious cooking skills. But when Uncle decides that Chuni will have to be sacrificed for the Feast of the Holy Cross, Ephraim scrambles to concoct an escape plan.
Beside their obvious narrative parallels, both Lambs are nourished by folkloric elements, drawing upon ancient tales in which children can be substituted for lambs and the trials of growing up can prove nearly as painful as being slaughtered. Determinism is dissipated in Zeleke’s Lamb by way of the director’s sympathetic approach to his characters (especially his women), while the film’s old-fashioned adherence to realism and humanism recalls the cinema of Satyajit Ray. Set within a series of gorgeous landscapes, this warm, unembellished film feels universal and timeless, but its key themes are also very timely: whether we’re talking about the internal or external, hometown or country, this is a highly resonant story about displacement.