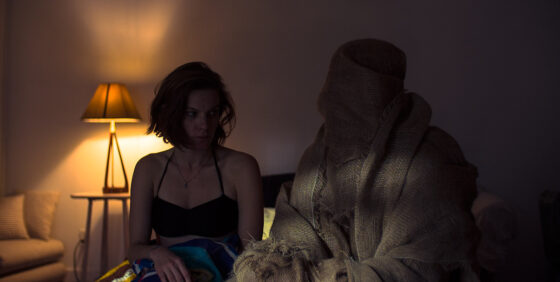 A queasy demise is the best-case scenario on the other side of a one-night stand in Harrison Atkins’ Lace Crater, a s-s-s-s-s-s-spooky and inventive indie debut that’s best seen, if possible, in a packed theatre. The ever-reliable Lindsay Burdge stars as Ruth, a twentysomething in the aftermath of a heinous breakup with her boyfriend Dean (Joe Swanberg, who also produced), who in the film’s opening minutes absconds to a friend’s parents’ house in the Hamptons for a drug-fuelled weekend getaway. Having cheerfully elected to stay in the so-called haunted room, Ruth—in dire need of a fainting couch—excuses herself for the night, only to find some kinda grime-covered burlap-man (Peter Vack) hiding in the closet. She asks him if he’s a ghost, but he introduces himself as Michael. In a measured, nasally geekazoid tone, he offers this explanation: “It’s more reasonable to assume I’m like part of the thing, instead of outside it.” Delicately, tenderly, he begins to shed some of his sheath. He doesn’t look that weird, Ruth tells him; they fall into each others’ arms in hot necrophiliac passion, only for her to wake up the next afternoon, alone.

For the most part, Lace Crater possesses that most recherché quality among its Bushwick-bred contemporaries: a certain knowingness about how it (and its listless hipster ensemble) are going to come off to a majority of viewers. The dialogue (much of which was either improvised or meticulously staged to feel improvised) is legitimately meandering and awkward, conjuring up an imagined screenplay littered with “ums,” “likes,” and authentically unfunny jokes that is Bujalskian at its best. Atkins’ movie isn’t just deadpan, it’s akimbo—and the initial encounter between Ruth and Michael is its strongest scene by a country mile. Their actual sex carries a whiff of Sharits, intercutting Michael on top of Ruth with Ruth by herself in growing, furious increments both nauseating and thrilling.

Ruth’s seething malaise as she tries to grapple with whatever-the-hell-happened-back-there allows Atkins to pepper the film with further nifty ventures into lo-fi psychedelia, but the narrative atrophies into something hoarier (and horror-ier) in her pursuit. Details are rich throughout; for a svelte twentysomething undergoing a hell of a lot of emotional pain, the short gap between being asked “Are you okay?” and “Wanna make out?” is made painfully obvious, and there’s a hilarious downward tilt from Ruth’s perspective to her ex’s untouched cheeseburger during a pained, botched post-breakup coffee date. But for my money, Crater can’t help but halfway succumb to the indie inevitable: there is way too much forgettable synth music (and spooky ambient tones for the predictable scenes). Character motivations get unseemlier and unseemlier, and there’s no real reason the third act’s forward hurdle couldn’t have come 45 minutes earlier. But ingested as a tussle with the idea of depression—a lurking malaise that marks the face and puts off everybody else, while remaining utterly invisible—Lace Crater feels like a more profound experiment than it’s letting on. (And that title, forever unexplained in the film’s text, just rolls off the tongue.)