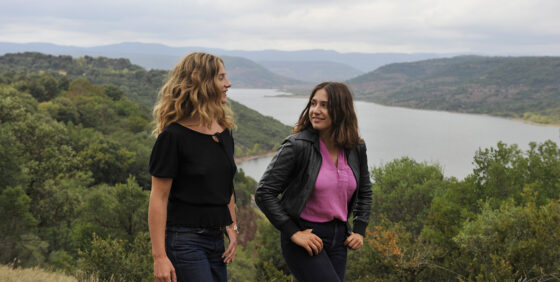 There is no discernible reason for Catherine Corsini’s La Belle saison to take place in the early 1970s other than the fact that the timeframe adds a historically authentic sense of conflict to this lesbian love story set in rural France. Delphine (Izïa Higelin) is a farmer’s daughter who takes off to Paris and becomes infatuated with Carole (Cécile de France), a prominent figure in a local feminist group. After some Second-Wave Feminism 101 exploits involving a group of cis-white conventionally attractive peers—including riotously gate-crashing anti-abortion panels, catcalling and goosing men on the street, and debating whether or not the “gay agenda” should be on their radar—Delphine and Carole fall in love and abscond to Delphine’s farm when her father takes ill. Emotional turmoil predictably ensues as Delphine is unwilling to reveal her relationship to the conservative community in which she grew up.

The visual interest picks up in the countryside sequences, as the rolling, bucolic hills are treated with the same sumptuous appreciation as the glimpses of soft, rolling flesh. But overall, the film is a fairly typical retread of the lesbian-falls-for-straight-woman narrative. Corsini does tweak expectations somewhat, in that the country mouse is the experienced queer lover who seduces the worldly but heretofore strictly hetero city mouse. But it’s hard to escape the sense that we’ve quite simply moved beyond this sort of boilerplate coming-out tale—and the fact that it’s set in the past is no excuse for such tepid familiarity.