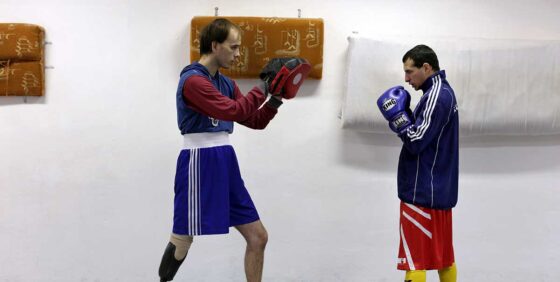 Ivan Ostrochovský, up to now exclusively a documentarian, draws heavily on that experience for his debut feature, a hybrid work in which the principals play lightly fictionalized versions of themselves. To the credit of all concerned, this was in no way obvious while watching Koza. Ostrochovský worked out the film’s rather slight story line with the actors themselves: it’s a sad tale of a washed-up boxer (Peter “Koza” Baláz; his nickname means “The Goat”) going back out on the fight circuit for money, with the dubious “help” of a crooked manager (Zvonko Lakcevic), a scenario that mirrored the actual experience of these two rather directly. This accounts for the non-actors’ general lack of charisma and, in the case of Koza himself, a flat affect bordering on mental incapacity. That is, the sort of taciturn miserablism customarily witnessed in this sort of film is a direct result of a semi-delusional man in dire straits, practically courting death. (Koza needs cash for his wife’s abortion, a procedure he himself doesn’t want her to undergo.)

If there’s a downside to Koza, it’s that without knowing about the conditions of its making, it plays like a rather conventional Eastern European art film. Baláz, who competed in the 1996 Olympic Games, is shown in nearly every shot wearing his old jacket from the national team. While this speaks to Koza’s refusal to let go of his glory days, it also means that the character has “SLOVAKIA” emblazoned across his back. As he travels through Europe getting repeatedly pummelled and ripped off, it’s hard not to bristle under the rather obvious allegory: the luckless Koza standing in for the fortunes of so many Eastern immigrants in the EU. Taking one man’s story and demanding that it stand in for the whole of post-Warsaw Pact despair is a somewhat questionable move, one that Ostrochovský may or may not realize he’s making.