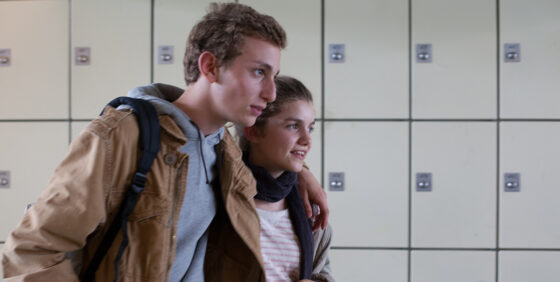 Maxime and Mélanie are in love. Maxime and Mélanie get pregnant. Maxime convinces Mélanie to keep the baby. Maxime and Mélanie are all of 15 years old. This is the primary dramatic thrust of Belgian director Guillaume Senez’s debut feature, an unsentimental look at teen pregnancy about a couple (ably played by the unnervingly youthful looking Kacey Mottet Klein and Galatea Bellugi) who cling to the adolescent fantasy of “together forever” without fully grasping the far-reaching implications of their impulsive desires.

Senez brushes up against some vital concerns as the adolescent couple explore their options in the face of an unexpected baby: the mother’s bodily autonomy, father’s rights, and abortion law are all touched upon (some with more nuance than others). But the biggest misstep in Keeper is the focus on Maxime, and how this new development affects his life and future as a burgeoning football star. For Mélanie, pregnancy becomes an erasure: she is transformed from an already barely sketched-out character into simply the vessel that bears Maxime’s child. Her motivations remain opaque, the worst instance being when one of her most important decisions is made off-screen. Despite its carefully applied art-house sheen—naturalistic long takes, shallow depth of field, and subdued palette—Keeper is nothing more than rote baby-mama drama.