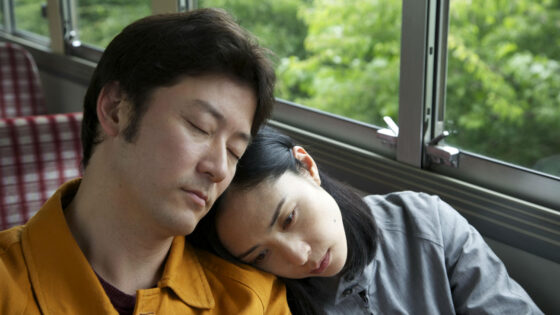 Mizuki (Eri Fukatsu) is a young piano teacher. One night Yusuke (Tadanobu Asano), her husband who went missing three years ago, materializes out of the blue in their apartment. He confirms that he’s dead and invites her to go on a journey to meet the nice places and people who showed him kindness on his long route back to her. The trip is not only a confrontation of mortality but also an assessment of their marriage.

Kurosawa Kiyoshi’s Journey to the Shore draws its inspiration from the kwaidan tradition of ghost stories. Ghost stories are often most effective when channelling emotions of guilt and regret over lost chances. Eliminating the distinction between the inner and outer world, they use the uncanny to materialize deeply embedded or repressed feelings. Mizuki reconstructs her dead husband from her memories, inner thoughts and fantasies. However, unlike, say, Kris in Solaris, who after encountering the simulacrum of his dead wife is assailed by remorse and a kind of resurrected love, Mizuki’s story doesn’t exude moral or biographical complexity. Meanwhile, the lax pace and tone become so diffuse and diaphanous that the finer points of its story are obscured.

What lends Journey to the Shore some authenticity and richness is the way it allows troubled memories to be mirrored through light, colour, emptiness or silence, echoes dwelling within the forces of nature. In the end, the real ghost is the filmed space itself.