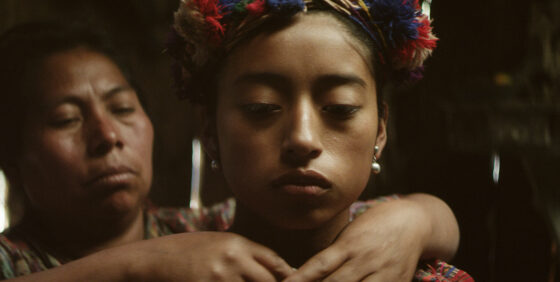 Like its eponymous volcano, Ixcanul smoulders. A lavishly raw ethnographic fiction with documentary elements set among a Kaqchikel Mayan community on the Guatemalan plateau, Jayro Bustamante’s debut follows the rituals of a coffee-farming village in his native country that sits in elemental proximity to an active volcano, the surrounding landscape both blackened with scoria and ripe with fecund jungle flora, cradling its inhabitants in a precarious but noble state of survival.

Within this, another landscape: the face of a 17-year-old girl, Maria, cheeks sunken in a moon-pillow face, almond eyes, swollen lips. Her mother tends to her black rope of hair, crowning her with a knitted ornamental headdress. Bustamente thus lays the foundation of a story that’s ancient and modern, old as the cinder hills that the family navigates to offer prayers. Enter men into this picture and a tragic element emerges beneath the agrarian routine of harvest, drinking, and waiting for pay. Tempting the mythological, there is a surfeit of snakes in the land these people toil.

The bruised lensing of Luis Armando Arteaga reveals a majestic landscape that is beautiful and cruel, vast yet hermetic. Beyond the volcano, beckoning, seems to lie a land of opportunity. The women feed rum to the swine to encourage mating, before summarily slaughtering the boar. An analogous courtship unfolds between Maria and a farmhand, who disappears toward la frontera while her arranged suitor begins to sniff duplicity.

Ixcanul eludes the kind of drama that ceremoniously, if all too inevitably, attends the bucolic strands of narrative suggested by Bustamante’s chosen milieu, instead opting for a more earthy but no less exigent denouement that grounds tragedy in nature’s cyclical progression. In retrospect, the ritual bathing of mother and daughter assumes a near religious dimension, hinting at the film’s non-didactic agenda of yielding to, more than making use of, its all-too-real subjects. Ixcanul loops upon itself to reveal a kind of eternal recurrence, anointed by the crowning of a princess who never knew she was royalty.