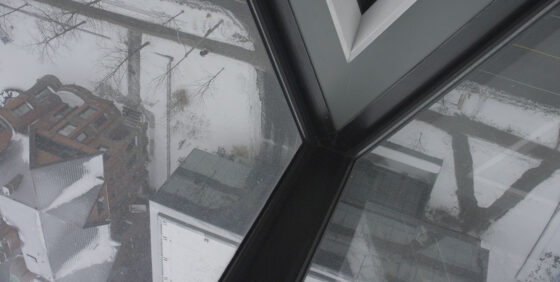 Considering the degree to which Mark Lewis’s work has evolved over the years, its origins in the Vancouver art scene of the ’80s and ’90s can go only so far in explaining it. But however inadequate such periodization may be, perhaps one way to consider Invention is as a kind of conceptual inverse to Jeff Wall’s photography. Where Wall halts human situations in order to imply missing narratives, Lewis moves through spaces across time, directing our attention to all the structural and atmospheric elements that surround and even engulf human activity. The fact that most of Invention is silent is a clear, even gutsy indication that people, though present, are secondary.

What Invention asks us to attend to, for the most part, is the formal arrangement of built environments: Toronto modernism, the Louvre, and São Paolo’s uneven urbanism. Lewis has rather seamlessly edited together a number of individual films, and this speaks to the remarkable consistency of his aesthetic program. His slow-moving camera articulates the linear forms of buildings as they converse with their environment, or the manner in which a single detail from a Jacques-Louis David canvas radiates not only the compositional logic of the rest of the painting, but even its relationship to the other works around which the master curators of the Louvre have chosen to display it.

While Lewis’s aesthetic interests have their roots in the gallery/media art scene, his work has always been informed by a deep connection to experimental cinema. Michael Snow has long been axiomatic for Lewis, but if there is one dominant spirit animating Invention it’s Ernie Gehr. Certain passages seem to directly quote such key Gehr works as Shift (1972-74) and Side/Walk/Shuttle (1992). And yet these moments register as sly, even joyous homages. This speaks to the rigour and intelligence of Mark Lewis’ filmmaking.