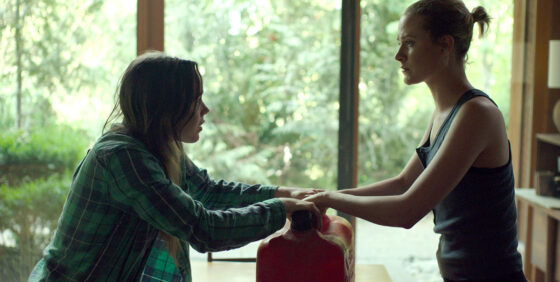 It’s the Time of the Wolf, Canadian-style. But where big bad Michael Haneke quickly gets his apocalypse on the Road, Patricia Rozema keeps her characters in the Cabin in the Woods—all the better to see them emote, my dear. Adapted from Jean Hegland’s allegorical novel about an unspecified near-future catastrophe that leaves most of the First World (and, it’s implied, pretty much everywhere else) without electricity, Into the Forest is probably the most physically impressive production of Rozema’s career: the adroit cinematography is by Daniel Grant, who moves his camera through and around the deluxe-cottage backdrop with purpose. Rozema’s script is all subtext: once Dad (Callum Keith Rennie) accidentally offs himself with a chainsaw, his twentysomething daughters Nell (Ellen Page) and Eva (Evan Rachel Wood) move to fill the patriarchal void and maybe replace it with a different kind of moral authority. Essentially a story of sisters tested and tempted (Max Minghella cameos as a wanderer who wants to take Nell away) and finally mythologized via waves of neo-Edenic imagery, Into the Forest is earnest, earthy, and a little bit silly, which is not an unwholesome combination. It’s also excellently acted by Page and Wood, neither of whom ever quite look as ragged as eight months off the grid would imply but still inhabit their roles with believable love and affection for one another. Rozema has spent the last decade or so lost in the industrial forest that swallows up Canadian auteurs; now, it looks as if she’s come out the other side.