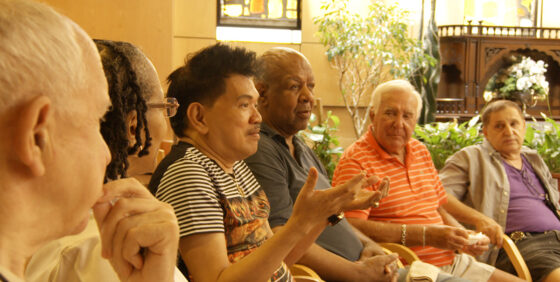 Frederick Wiseman’s modus operandi was perhaps best described by German film critic Olaf Möller: “[His] work is about civilization and its creation, the work it takes.” In Jackson Heights adds another chapter to Wiseman’s monumental ongoing treatise while also offering another installment in a separate cycle devoted to various isolated communities (a trilogy is now formed with Aspen [1991] and Belfast, Maine [1999]).

Jackson Heights is a neighbourhood in Queens, New York’s biggest borough, where 167 different languages are spoken by one of the most ethnically and culturally diverse populations in the world. Wiseman focuses on encounters between several subsets of the locals, including gay activists who, in the course of a year, meet at a Jewish centre to discuss a massive upcoming Pride parade and Mexicans who share their experiences about crossing the border. Almost all the locals are concerned with the enforcement of the ominous Business Improvement District Strategy, which threatens to jack up real estate prices as large corporations like the Gap squeeze mom-and-pop shops out of the area.

The film presents the fruits of a colossal undertaking: nine weeks of shooting, ten months of editing, and 120 hours of footage whittled down to a 190-minute running time. That In Jackson Heights was a modestly budgeted production shows in a few instances of sloppiness that are quite uncharacteristic of Wiseman, as broken pixels are noticeable in some images and mics dangle in the shot every once in a while. That being said, this kind of nitpicking is essentially moot. Packed with extensive monologues, the movie in a sense captures the birth of political discourse (Romuald Karmakar’s Democracy under Attack: An Intervention would make for an interesting companion piece). Certainly infused with melancholy, this portrayal of waning cycles of life, both human and communal, nevertheless illustrates quite vividly the benefits of grassroots democracy, self-government, and mutual respect––in other words, it lays bare the inner workings of civilization itself.