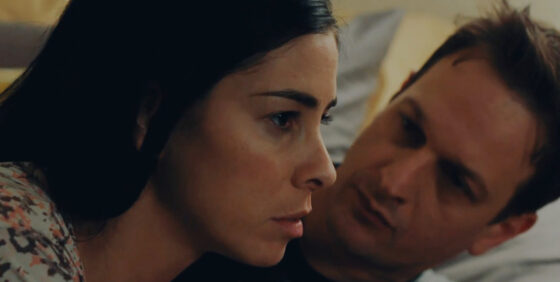 “Do you want to hear about the daddy issues or the drugs?” queries Laney (Sarah Silverman) to her doctor on the first day of rehab; 28 days later, she’s had ample time to talk (and think) about both, but it’s unclear as to whether or not she’s been healed. Because Laney is institutionalized and released midway through I Smile Back, it’s just a matter of sitting around and waiting for the relapse, which is why the whole movie exists in the first place: to show that its stand-up superstar leading lady has the dramatic chops to play a woman on the verge of a nervous breakdown.

She does: Silverman was warming up for this role with her alcoholic-sister-in-law character in Take This Waltz (2011), and she slips convincingly into the clenched, hesitant physicality of a woman with no sense of what she’s going to do (or say) next. It’s a strong, carefully modulated performance—the word critics are apt to use is “brave”—and it’s well matched by Josh Charles’ turn as Laney’s long-suffering but strenuously devoted husband (a scene where the couple reminisce about their first meeting is sweet and believable). But the actors have been reduced and instrumentalized by a screenplay (co-written by Amy Koppelman, from her own novel) that’s designed to put its characters through the wringer, including a late detour into Lars von Trier Land. The pushiness of the writing clashes with Adam Salky’s strangely shapeless direction, and the film trails off in the home stretch, although the final image—while a bit too literary—sticks in the mind after the more obviously shocking moments have faded.