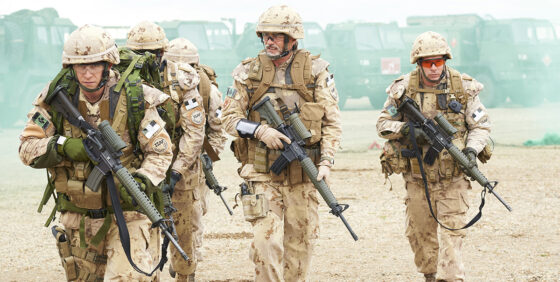 Canada, Fuck Yeah. Written, directed, starring, and narrated by Paul Gross—close-shorn and bearded like a badass—Hyena Road tries to show that war and war movies aren’t just for Americans. Our boots are on the ground and filled by strapping specimens like Rossif Sutherland, cast here as a northern cousin to American Sniper’s Chris Kyle whose finer feelings are well-directed (“I don’t shoot kids”) and whose trigger finger only gets itchy when Taliban thugs are abducting little girls. Gross, meanwhile, plays an intel officer trying to manipulate various Afghani factions into conflict and collaboration with one another, all to facilitate the safe construction of a new transport route, the underlying politics of which are given lip service along with all the other questions any responsible viewer (or filmmaker) might have about this particular milieu and subject matter. Under the guise of his character’s hard-bitten, seen-it-all cynicism, Gross the director sells us video-game firefights with AK-wielding insurgent ciphers and foregrounds the problems and psychology of white, enlisted men and women: a supposedly authoritative command centre boss (Christine Horne) is efficiently reduced to baby-mama duty, while Allan Hawco duly ogles his sexy wife’s boobs on a webcam before heading out to get some on the side. The film isn’t hawkish, exactly, as it doesn’t have any strong point of view, beyond the barely veiled hope that a dusty colour palette and helicopter shots will find purchase in the domestic market.