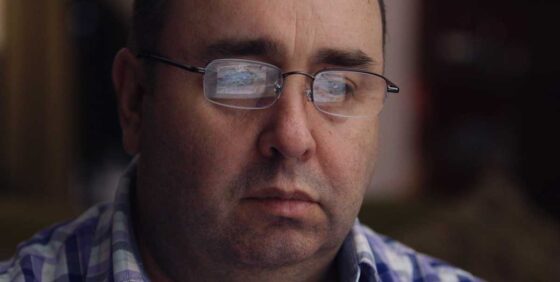 There’s a moment in Kazik Radwanski’s impressive feature debut Tower (2012) where a dentist tells thirtysomething man-child Derek (Derek Bogart), a better-adjusted, Torontonian Travis Bickle, that he has an impacted tooth coming in from the side long after most people’s wisdom teeth cease to bother them. Radwanski looks to another late bloomer with his just as well-observed How Heavy This Hammer, closely following listless middle-aged father Erwin (Erwin Van Cotthem), who periodically escapes his humdrum domestic life through online strategy games that allow him to reimagine himself as some sort of Viking. In just two features and several shorts, co-conceived with producing partner Dan Montgomery, Radwanski has proven himself a gentler, Southern Ontarian answer to Dardennes-style social realism, finding dignity and pathos in the repetitive rhythms and small pleasures of working-class lives. Drawn to distinctive mugs and voices, he’s turned up another gem in the rough in Van Cotthem, a funny, natural presence who holds Radwanski’s claustrophobic close-ups whether he’s improbably bathing his adolescent sons with his beefy hands, charging ahead as an amateur rugby goon, or staring dazed before his retro computer monitor, ghostly-white mirror images of the screen lighting up his glasses as a Bellini aria swells on the soundtrack. You could read that operatic touch as satirical, a jab at the distance between Erwin’s quotidian life (which he seems unable or unwilling to better) and the fantasy he’d choose for himself if he could self-actualize. But Radwanski’s previous work—including his recent short Cutaway, which follows an inarticulate worker’s experiences, momentous and mundane, entirely through his hands’ interaction with the world around him—suggests a more generous reading: that people like Erwin are noble for the lives they wish they could lead, even if the ruts they’re stuck in seem inescapable