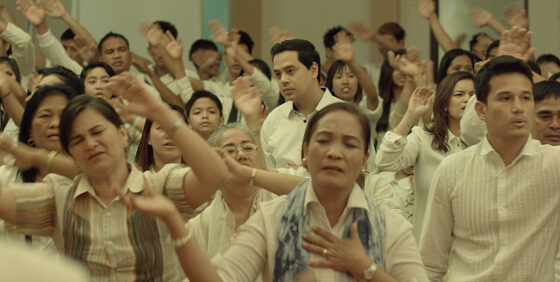 Erik Matti’s recent actioner On the Job (2013) was a big hit at home and even got a moderate release in North America, not that the film managed to bring in those coveted Crouching Tiger, Heroic Grandmaster crossover dollars. But there is a sheen of transnational professionalism that coats Matti’s work—quite distinct from the Filipino New Wave of Lav Diaz, Raya Martín, or even Brillante Mendoza—so it’s easy to see why industry types would get out their chequebooks. Honor Thy Father, Matti’s latest, is as accomplished as its predecessor, and shares much more of a formal kinship with popular Korean cinema than with most recent Filipino exports. But I don’t imagine any US distributors are going to be chomping at the bit to add it to their roster.

For one thing, this is a genre tale through and through. Reformed criminal Edgar (John Lloyd Cruz) discovers that the investment scheme his wife (Meryll Soriano) and her father have been running is a Ponzi scheme, and the townsfolk now want their money. Once thugs threaten the couple’s child, it’s time to drop the bourgeois-respectability act and pick up the gun once more. There’s a distinct comfort in watching Matti go through these highly predictable moves, and Honor is slick enough to connect with crossover auds. But a major subplot involves the corruption and outright idiocy of the Christian church—something unlikely to play in Peoria, as they say. Big and dumb enough to announce its Grand Theme in the title, but edgy enough not to avoid courting controversy, Honor Thy Father is neither an art film nor a multiplex item. It’s just kind of there, doing its thing for no one in particular.