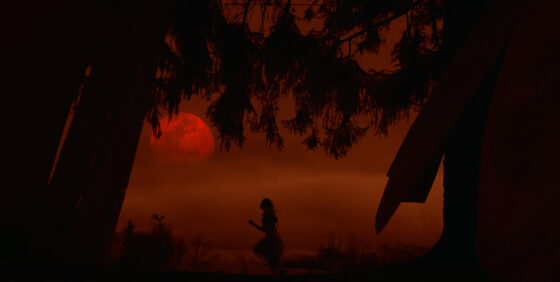 One hopes that Bruce McDonald’s heart wasn’t in Hellions. At times, it’s feeble enough to be mistaken for backyard filmmaking, except that it lacks the joy—the getting-away-with-somehing giddiness—of kids remaking Halloween with a consumer-grade camcorder. John Carpenter’s classic is evoked a half-dozen different times over the course of the truly incomprehensible storyline, which involves a pregnant teenage girl (Chloe Rose) pursued (or is she dreaming?) by a cabal of masked kiddies (or are they demons?) with designs on her unborn baby (or is it a monster?) while the sky above her Southern Ontario hometown fades to pink (shades of In the Mouth of Madness, which looks like The Innocents by comparison). As a local doctor introduced wearing plastic Spock ears, Rossif Sutherland sounds like he’s actually choking on his dialogue (“They broke my legs!” is the ADR delivery of the year), while Robert Patrick cashes a paycheque (in Canadian funds) as a cop who knows…something…about the Hellions and why they’ve come but keeps getting interrupted before he can explain it. Maybe it’s for the best, since it’s only the sheer, whimsical arbitrariness of McDonald’s horror-movie imagery—the random shock cuts to crouching creatures and whirling cuckoo clocks—that makes Hellions memorable at all. Oh no, wait: there’s also the score, which doubles, triples, and quadruples down on the kiddie-choir melody of Rosemary’s Baby and ends up with something insanely, hilariously catchy. I expect it’ll become a late October staple on radio stations in Hell.