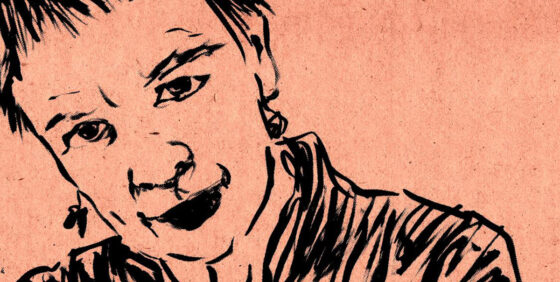 After being approached by Arte three years ago, renowned musician Laurie Anderson started developing a personal film essay in memory of her beloved rat terrier Lolabelle, who died in 2011. Though the pet had gone blind not long before death, Anderson still managed to teach her painting, sculpture, and music. Initially conceived as a eulogistic short, the film ballooned into a 75-minute feature as the story of one pooch yielded meditations on mortality generously sprinkled with quotes from Anderson’s personal Buddhist teacher and The Tibetan Book of the Dead. Alongside two other deaths, one of a mother and one of a friend, Heart of a Dog implicitly deals with and is haunted by a third loss, as Anderson’s late husband, the great Lou Reed, makes a cameo appearance and lends his song “Turning Time Around” for the final scene. Providing succinct commentary on the post-9/11 changes in the American political landscape, the movie offhandedly name-checks Kierkegaard, Wittgenstein, and David Foster Wallace, who have guided Anderson through the process of mourning, by her own admission.

Out of reverence for Laurie Anderson and respect for the confessional tenor she chose, I should probably leave the reader with this smattering of trivia lest I stand accused of unnecessary cynicism. However, it must be said that Heart of a Dog would have been a noticeably superior movie if Anderson’s voiceover had soundtracked a black screen rather than some nondescript visuals more appropriate for use as a Windows screensaver. The film speaks of all things being interrelated—of religious experiences and how the world works and what grief feels like. And yet all these roads lead nowhere as Anderson settles for vapid platitudes (the very same charges held against Malick’s movies, despite their formal perfection), and the author’s mourning of Lolabelle remains the sole emotion ringing true. In a sense, Heart of a Dog is the reverse of Joaquim Pinto’s What Now? Remind Me (2014), a fascinating and unforgettable In Memoriam that blows away devotees of Portuguese cinema and the uninitiated alike. In the case of Heart of a Dog, the only importance is attached to the name of artist who signed this film.