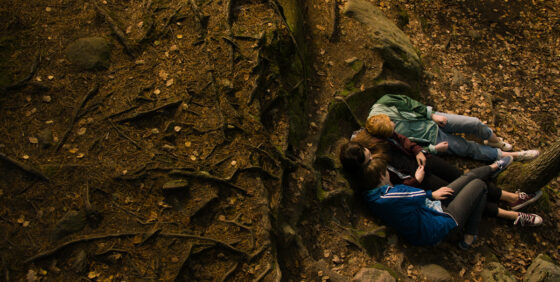 Here we have a film that begins as mere hackwork, and finishes as something actually quite offensive. A teen movie from Sweden that for all its sincerity displays all the subtlety of pulpy Hollywood entries like The Craft or even the recent low-budget B-picture The Sisterhood of Night, Girls Lost has no idea that it’s preposterous, which is why it keeps getting into trouble. The film focuses on three friends, Kim (Tuva Jagell), Momo (Louise Nyvall), and Bella (Vilgot Ostwald Vesterlund), who are relentlessly tormented by pretty much everyone at their high school. They’re called sluts, whores, lesbians, and in one harrowing moment, the zaftig Bella is almost stripped down by a mob of about ten guys eager to see her breasts. No adults do anything about this because, this being conservative Sweden, bullying isn’t considered a problem (the girls’ gym coach tells them to toughen up). Anyway, after some Eyes Wide Shut-inspired dress-up, Bella goes through her deceased mom’s gardening supplies and discovers a magic seed that produces a black flower overnight. Said flower oozes a vanilla-flavoured elixir that morphs the girls into boys. Along with their dicks, they gain instant respect, soccer skills, and a confidence to stand up for themselves once they’re back at school as girls. So yes, it takes time served as a dude for young girls to really feel good about themselves. But even more troubling is the way Keining handles the character of Kim, who through the transformation discovers conclusively that she is not a girl but a trans boy. Suffice to say, Girls Lost’s characterization of Kim goes from inscrutable (“boy” equals violent and destructive) to pathetic, with a bizarrely tragic conclusion that is more 1950 than 2015. This movie is so damned muddled there’s no telling what its makers even wanted to accomplish, but the end result is a Gordian knot of “complications” for their own sake.