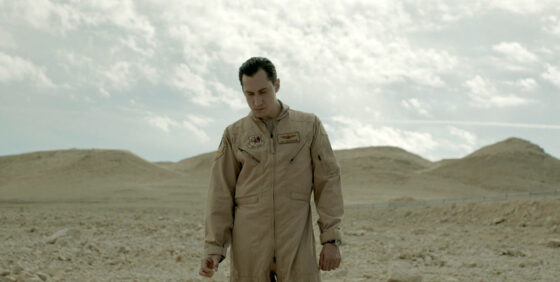 Dutch filmmaker David Verbeek adopts an (initially) opaque, almost Apichatpongian tri-partite structure in this boldly visualized response to the alienated nature of the War on Terror. French-born lieutenant Ivan Delphine (Claire Denis fixture Grégoire Colin) “pilots” drones, calling down missile strikes on unsuspecting al-Qaeda targets in the Middle East from the security of a bunker in the Nevada desert. A taciturn type, he claims to be immune to any psychological cost, though unlike his US comrades he makes a point of learning the correct Arabic pronunciation of his kills (through Google Translate, of course). He also dabbles in one of those hard-boiled movie-movie relationships with a stripper (Lizzie Brochere). “I’m impotent,” he tells her. “I haven’t been with a man in a long, long time,” she retorts.

Mostly, Verbeek’s oblique, stripped-down approach camouflages the clichés and, I suppose, correlates with the disconnection that is Ivan’s métier, but it’s touch and go. Just when the movie’s sketchy dramatic framework seems to be on the point of collapse we’re plunged into a disorientating, wordless 20-minute dream sequence that serves as the picture’s lynchpin. Superbly photographed in stark bleached-out whites and tenebrous blacks by Frank van den Eeden, this mesmerizing central section is easily the film’s strangest and strongest. The third and final part finds Ivan (presumably—he’s not named) slumming as a baggage handler at a European airport, seeking redemption, or maybe punishment, at a predominantly Arabic kickboxing gym, and falling for a single mom, prettily played by Ms. Brochere (again). Do the three parts really connect? Does it matter? Verbeek has the sleight of hand to play it both ways, and while it may not hold up in the light of day it resonates well enough in the darkness of the movie theatre.