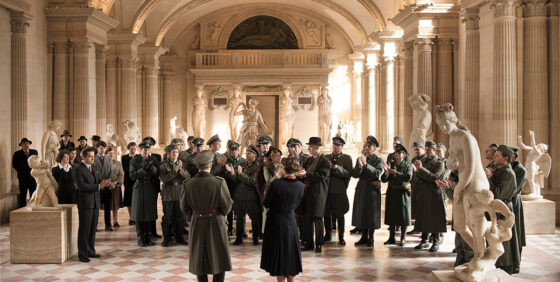 [SPOILER: James Franco does not appear in this film.]

There was no reason to expect something playful from Sokurov, especially after his excruciating take on Faust (2011). But with Francofonia we find Russia’s melancholic master offering up an essay-film take on the Louvre that’s downright breezy. After setting up a contemporary framing story that has Sokurov in his office, Skyping and then losing contact with a ship’s captain named Dirk (don’t ask, doesn’t matter), the director starts waxing philosophical on Western culture and the role of museums in preserving it. While Francofonia has very little to offer on the subject that’s new, Sokurov is spry and chatty and keeps things continually engaging. With its first-person musings and associative image-track, Francofonia’s first half resembles nothing so much as a late Godard video, but the approach and mood is open and accessible even as the subject matter turns highbrow. The tone is miles from either Godard (e.g., Histoire(s) du cinéma) or Sokurov’s own languorous video work (e.g., Spiritual Voices). In its second half, Francofonia zeroes in on the German occupation of France. As he did in the superficially similar Russian Ark (2002), Sokurov sometimes acts as an unseen interlocutor, speaking with the ghosts who haunt the Louvre, including a smug Napoleon (Vincent Nemeth) who affects an amusing Borscht-belt plotz upon discovering that the Prussians have taken over the asylum. But most of the remainder of the film is spent dramatizing the wartime cooperation between the Louvre’s Vichy-era chief, Jacques Jaujard (Louis-Do de Lencquesaing), and Nazi cultural attaché Franz Wolff-Metternich (Benjamin Utzerath). Coming from a figure such as Sokurov—whose anti-Soviet conservatism has so often led to political positions that are illegible, if not outright problematic, to his contemporaries (alliances with Putin, apparent anti-Semitism, patronizing views toward Chechens)—Francofonia might be seen as the clearest statement of position we’ll ever get: everyone is compromised, and you negotiate as best you can with the situation on the ground.